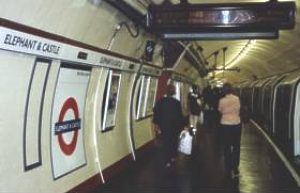 Confirmed telecommunications specialist David Mery was arrested at Southwark tube station in London. What had he done? Among other things, he’d failed to look at police on the way into the station, was wearing a jacket they decided was ‘too warm for the season’, had a bulky rucksack, and two other men entered the station at about the same time.

After being searched, he was almost released relatively quickly, but a series of unfortunate coincidences including records of loosely security-related events at his workplace, the electronic bit of an old work pass on his person, and various telecom gadgetry in his flat, meant that he was held in custody for about 10 hours before finally being released at 4am the next morning.

Obviously the UK has been on a heightened sense of paranoia since the Underground attacks (and apparently this incident happened in July, just a few weeks afterwards). Perhaps Mery can thank himself lucky that he didn’t run and they didn’t shoot him. But what they appear to have ignored here is the presumption of innocence, even after he and his rucksack had been searched.

I know the transport enthusiasts are starting to worry about being hassled by security when pursuing their hobby — though they’re some of the people most likely to notice when something on the system is amiss. And apart from innocent people getting caught up in the net, there’s the obvious concern of enormous amounts of police resources being tied up on incidents like this for no good reason. Obviously a balance needs to be found, but it would seem in London at least they’ve swung too far towards the paranoid.

8 replies on “Watch your step”

You gotta laugh at the latest ads telling you to report suspicious activity to public transport staff…. What staff?!?

Who cares! Well you will when it happens to you. Legislative changes are happening here but I don’t understand them very well. I do know if the government is pushing it and civil libertarians are protesting, we should be worried.

God, it scares me that he *could* have tried to run off…

He’s lucky. The last one who they singled out as being suspicious got summarily executed – and all the cctv tapes were convienently lost, wiped or non-existant.

Dissenting voices are either being ignored or bulldozed or in the case of the labour party conference, thrown out then arrested under the prevention of terrorism act.

What’s this country coming to – ??

“We” (that’s all of us democratic folk) keep saying the terrorists won’t win. Then “we” pass draconian laws like the U.S. legislation referred to as the Patriot Act.

The presumption of innocence was almost fatally injured on the 11th of September 2001 in New York city. It was then sent back to the reserves bench and, according to recent reports of its condition, may never join the main game again!

These new Australian laws are supposed to protect us from terrorists. The ones who haven’t attacked us yet, even while we’ve been so vulnerable without the laws. Pity they won’t extend to Bali.

The tube moves 2.7 million people a DAY, on average. One person being over enthuastically singled out every couple of months is a very small percentage.

If the “price” we are paying for increased security means that I have a chance of being searched that is still sod all, then I can live with it. When/if terrorism substatially goes away then we can remove security measures, change laws, send coppers home to their families, etc then.

As for keeping the police in line, the zeal in which the papers jump on the smallest infraction (imagined or otherwise) made by the police will keep the police on their toes.

In the mean time I quite like it that up to a dozen coppers visually check me out as I emerge from a busy tube station. Maybe, just maybe, they will catch someone, or more likely the baddies will decide it’s all too hard and give up or go somewhere else.

Ah yes, but JM, would you be so happy if the dozen coppers, instead of visually checking you out, had held you in custody for 10 hours?