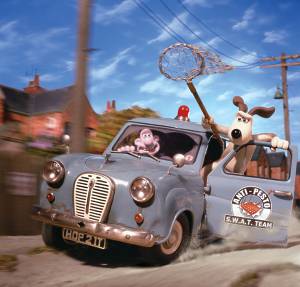 Robots — This had its amusing moments. It didn’t suck. But it fails my “if it were the only thing playing on a long plane flight, would I watch it?” test. It wasn’t engaging. It wasn’t interesting. I felt little sympathy for the characters. It felt like a poor man’s Monsters Inc. Uninspired.

Wallace and Gromit: Curse of the Were Rabbit — There was so much detail, and so many references to pick up on (but not so they got in the way of the story). One review I read suggested it was too long, but it didn’t seem that way to me. Very funny stuff, had the cinema audience laughing out loud right the way through. Stick around for the credits; the bit at the end is worth it.

Ooo, I’m jealous. W&G doesn’t get released here for another couple of weeks. I’m glad to hear it doesn’t suck. The commercials I’ve seen for it aren’t exactly engaging or even in the spirit of other W&G movies.

This summer we met an English couple traveling around our state; the she of the couple had a Sean/Shorn backpack. Too cool.

I took my children to watch Wallace & Gromit, the first time they had heard of them was the ads for the movie. Too long for them? Maybe, but for me it was great, I would rather have gone with a mate.