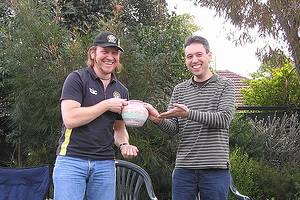 Since Rob, not I, won Tony’s footy tipping competition this year, yesterday it was my melancholy duty to give Rob the World’s Ugliest Trophy. You can tell from the look on my face how disappointed I was to give it over. (Pic by Tony)

In happier news yesterday, my friends Josh and Cathy’s baby arrived. Young Owen arrived in the world just before midnight, and all three of them are doing well.

I note that of the two sets of friends I’ve helped move house in the last couple of years, both have gone and had babies, thus reducing their capacity to reciprocate when I move next month. Not that I think it’s a conspiracy or anything.

2 replies on “The trophy and the baby”

It is nice to see happy people. Nice pic.

quite often ones fortunes in the footy tipping are directly proportional to how well your footy team is performing. my side earnt the wooden spoon (bottom place) this year – and by no coincidence i’ve crashed spectacularly out of contention in my footy tipping the past 3 years. there is no place for loyalty these days.