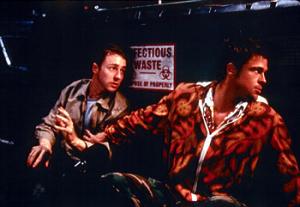 Fight Club — The first rule of Fight Club is don’t talk about Fight Club! But I will. Fight Club has been on my (long) list of “great movies that came out ages ago but for some reason I didn’t see when they were new”. I must have been busy at the time. A colleague has been nagging me about it, and I’d heard from various trusted sources that it was very good, so when I saw it on special at JB Hifi last week for $13, I bought it.

What can I say; superb stuff, an examination of a side of the male psyche not often seen in a supposedly civilised society. I have to admit, I didn’t see the twist at the end coming. Not sure about the end bit with the gun though. Still, there’s a lot in this film, and I might have to watch it again to take some more of it in.

My all time favourite movie as well :)

I particularly like Brad Pitt’s dialogue (monologue) with Edward Norton before they crash the car on the enbankment. ‘If you were to die right now, what would you be proud of?’ Just a gem of a movie.

I found Edward Norton’s discussion about the philosophy of fight club in the DVD version(**** Martha Stewart!) also well worth listening to.

Agreed :) Fight Club was so totally not what I expected it to be at all. One of my work mates kept telling me to watch it, she wouldn’t say why but that I would really enjoy it. I’m very glad I did!

Top film. Unfortunately it has limited appeal which makes sharing it with all my friends an unlikely prospect.

You may be interested to note that there is a scene early in the film where Helena BC is walking away at night (from one of the meetings I think). In the bottom right hand corner of the screen in one or two frames, a picture of Brad Pitt’s face flashes up.

I think that there is also a frame in the credits of an unsightly scene, but I haven’t looked at that one closely.

It’s most definitely in my list of top 10 movies.

Gee and i thought it took me awhile to see it in 2001 – lol. It’s still #1 on my list. My partner and I often use ‘I am Jack’s irritated colon’ or some such comment… and as for Meatloaf’s character, Robert Paulson – what a classic!! Andrew – what about Ed Norton saying that people come up to him in restaurants and say “Great movie…………Sir”

‘Don’t worry sir, it’s been taken care of” :) Yep bet Edward Norton is sick of people playing on that line by now.

There are many great parts of this film, I personally got more out of subsequent viewings than I did the first.

Maybe it’s just me but I think this film struck a nerve with gen x’ers. It’s true that we have had no war or great depression (watch the next decade carefully though) and we have grown up in Madonna’s material world where we are our bank balance and the clothes we wear.

I just love the part where the boss confronts him about the copy of the fight club rules left in the photocopier and Norton launches into his speech about ‘you should be very very careful’ :)

Ahh what a movie. I just wish someone would grab Spielberg and lock him in a room to watch fight club for a month, he’s probably happy making mountains of cash though.

Watch it a couple of times – you pick up more things, and keep an eye out for multiple single-frame flashes of things…

I also strongly recommend the book by Chuck Palahniuk. I’m glad I saw the movie first, but it actually does a very good job of recreating the book. There are a couple of differences in the book, but I won’t spoil them for you :)