Well, there’s one bloke I shouldn’t expect a Christmas card from this year… 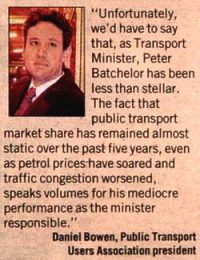 Maybe that came over as being a bit harsh, but it was an attempt to subvert what was essentially a fluffy publicity piece and provide a view of how well his ministry is actually performing.

Most people, including those who don’t use it, appreciate the advantages that public transport brings to our city. And while there have been some improvements in recent years, we’re playing catch-up.

It’s a little like walking up a down escalator. We’re moving at walking pace, but we really need to be moving faster to get anywhere, especially (to stretch the analogy further) when someone at the top of the escalator (the same government in fact) is pressing buttons to make it accelerate, by way of funding so much road network expansion.

Figures show that PT’s market share of travel isn’t really growing (sitting on about 9%, up only one point in the last four years), and certainly getting nowhere near doubling as the government claims to be aiming for with their 20/2020 target. And market share won’t grow substantially while so many people don’t have usable public transport.

And we know how woeful the buses are. Until there’s a usable network covering the entire city, we’ll continue to be moving, but not getting very far.

7 replies on “Time to walk faster”

Over five years, Perth, the lowest density city in the world, has doubled the size of its rail network and invested in improving its bus services. Perth is now investigating the return of tram services, while in Melbourne the Transport Minister refuses to provide Doncaster (a principal activity centre and earmarked for high rise development) with tram access.

There is more to Melbourne than just the confines of the Transport Minister’s office on Nauru House. Perhaps Bracks needs to follow the lead of Geoff Gallop and integrate planning and transport into a single portfolio.

It has certainly achieved results in WA and Rob Hulls in his current tenure as Planning Minister is certainly capable of inheriting transport.

The Bracks Government has been attempting to dodge the ‘do-nothing’ tag since it was elected in 1999. The source of this inertia and lack of progress towards improving Melbourne’s public transport are certainly related.

I think we’d better be careful that we don’t fall of the bottom of that escalator! Public transport in Melbourne has seen decades of neglect and Batchelor, despite all his promises back in 1999, has done nothing at all to reverse that trend. I think he’s funded one “SmartBus” route that doesn’t even run at tram frequencies, they’ve extended the 75 tram to Vermont South, which is not even half what they promised (which was extending it to Knox) and they’re extending metro trains to Craigieburn, only they’ve scrapped a station and are cutting down on basic station facilities. That’s not to mention the Fast Rail fiasco, where he has ripped up half the track between Melbourne and Bendigo.

No doubt there are many other broken promises as well, that includes the Rowville railway line, Airport rail link, etc.

The government has also planned some additional “SmartBus” services though they won’t start for several years. They should have started them immediately. That’s not to forget that the frequencies no doubt won’t be quite there yet. He’s going to have to ensure that the government does a lot more than this, if we’re ever going to seen anything even remotely close to reaching the 20% target.

So far, he has failed in my books.

That is just so concise. “Why don’t you use public transport?” “Because I don’t have any.”

The lack of an efficient rail service to Doncaster is truly criminal.

Maybe for the next election, “I have a vision. A vision of rail extensions, bus extensions, service extension….”, and then some detail and budget allocations.

Too harsh – hardly think so. He’s full of excuses, broken promises, and while he has a worthy mode shift target, he can’t explain how or when we might even start achieving mode shift. Meanwhile public transport is going brackwards, and we continue to see transport budgets that facilitate mode shift away from public transport.

Be glad none of you live in Sydney!

I’ll gladly throw up Sydney’s rail network vs Melbourne in a epsi challenge any day of the week!

We had over 4 million commuter trips less last year than the previous one and this year we’re headed for another record as Sydney siders flee the pathetic and inept system we have in place falling to pieces. This is backed upon the fact that last year Sydney Cityrail held it’s worst running record statistics for the past decade!

Next month, Cityrail will be running to a new timetable for services that further slashes the number of trains that are operating in order to try and get something close to ‘on time’ running. (currently, a Sydney train that’s up to 11 minutes late is actually not deemed ‘late’ in their statistical analysis – even then, trains are still running ‘late’ even by Cityrails standards on average 30-40% of the time!).

The pathetic joke about the new timetable is that services will now actually run SLOWER than they did on the same system in 1930s!!!

That’s right, the rail system in Sydney will now run slower than it did over 70 years ago as of next month!!!

It’s a farce and typical policy of governments that for years have been grinding down public transport with a complete lack of funding and now it’s in such a state of disrepair no short term resolution will fix it.

They honestly believe that having a lot less services (so people have to constantly stand) that run even slower will somehow ‘fix’ commuters’ angst with the rail system. How naive they are!

Mark my words, the 2007 State election in NSW will definitely have the public transport system as a major political chip on the table…. over 1 million daily Sydney commuters are downright fed up with the excuses and terribly service and are willing to make the point clear at the ballot box!

So yeah… we feel your pain up here in Sydney too Melbournians!

“The State Government has identified a desire to achieve 20 per cent of all trips in Melbourne to be undertaken on public transport by the year 2020. It is clear from the budget initiatives over the past several years that there is no intent within the State Government to provide any serious investment in public transport infrastructure within Melbourne and certainly very little within Wyndham.”

It is a sad indictment on the current Transport Minister if local councils must set the agenda.

Even where there are services, they are often running at capacity. The Broadmeadows line (particularly in the morning peak) cannot cope with extra travellers. Although the bursts of cancellations are good for one thing – it means I can get on the train for the few following weeks while people give up and return to their cars.