(This post backdated to the date it happened, not the date I wrote it.)

Marita, Justine and I got a lunchtime flight out of Melbourne, and got to Canberra, Australia’s capital city, a little less than an hour later. Straight off the plane, through baggage claim and into a cab bound for Kingston, and the serviced apartment we were staying in.

They kindly offered us a discount voucher to Cockington Green, a miniature village . Obviously as three people who had come to Canberra to catch up with friends and take in a few galleries and national buildings, it was very difficult to convince ourselves that we shouldn’t drop all those plans and spend our limited time going to look at miniature English village buildings.

After settling in we set off walking. It was mid-afternoon, quite cold (though not as cold as a few days previous when I’d observed Jim Middleton on the ABC News reporting from Canberra in the middle of a snow storm). A reasonable walk got us to the National Gallery of Australia. I snapped a photo of the big ball-like thing hanging in front of the entrance, then wished I’d kept the camera out and primed for another 20 seconds, as two helicopters thundered by behind it at low altitude. 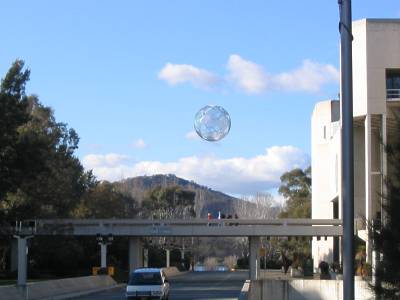 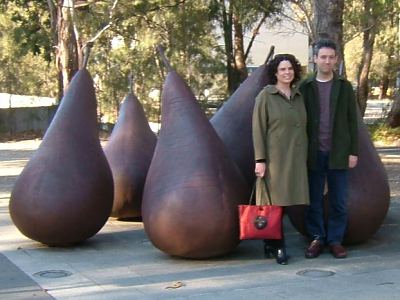 The NGA building was pretty uninspiring from the outside, but inside was a wealth of great stuff. We wandered around, admiring some great art, including that of McCubbin, probably my fave John Brack, Brett Whitely, a Picasso or two, Pollock’s Blue Poles, some Heidelberg School and some great Aboriginal art. An Albert Tucker caught my eye, with its portrayal of a Melbourne number 6 tram. Then I noted the body parts strewn on the ground around it. Hmmmm.. Not sure I quite understand that.

After some time in the NGA, we decided to walk over to the National Library of Australia, primarily for the great coffee shop, famed in song and fable. It was closed … D’oh! But on the way we did note a monument to Vincent Lingiari, which had a tinny speaker playing Paul Kelly’s From Little Things.

It was now about 5pm, and we noted that the Canberra rush hour in that particular part of the city seemed to entail up to 5 cars in a row. The whole place is very spread-out (more about that later), and there were funny round bus stop shelters dotted about the place.

We were now in dire need of a nice hot cup of tea, but none were to be found, as the cafes attached to each building had shut up for the night. We walked back past Old Parliament House and the Aboriginal Tent Embassy, and headed for the Kingston Shops, where we bought supplies (including tea). 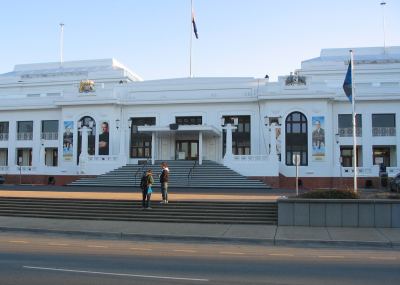 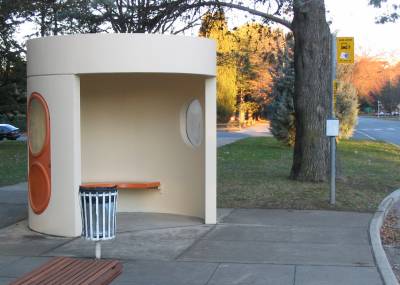 After a cup of tea and a rest, we headed out again for the Manuka shopping centre to look for a nice place for dinner. Eventually, we found it: Christophe’s, a French provincial restaurant, serving just precisely the kind of food you want on a cold night. Not cheap, but hot and totally delicious. I may not know how to pronounce it, but I can tell you the Beef Bourguignon was superb, as was the Crepe Suzette.

Full, we waddled out of the restaurant and staggered back to the apartment. To say it was cold would be a gross understatement, but at least we walked off some of the food.

When I moved to Canberra I was also struck by those shelters, thinking they were like cut-out septic tanks, although ‘igloo’ is the more common term. There’s a few of them in the Gosford-Wyong area, and IIRC, Tasmania.

I trust glanced at the timetable (but for no longer than was sociable) and saw how much worse off they are.

We used to live next door to Albert Tucker’s sister and in was strange to see some very disturbing art work of his hanging on the “sweet little old lady’s” walls.

That globe near the National Gallery apparently used to be a World Globe, however it got struck by lightning and was destroyed so was rebuilt into what you see today.

How is Cockington Green near Kingston? Its in Nicholls up north in Gungahlin, nowhere near. Did you go to the Kingston IGA? Thats where I shop sometimes. Except that I was in Melbourne on the weekend.

Did the cabbie drive you to Kingston via Fyshwick (industrial area) or via the Kings Ave bridge? Some cabbies take different routes, and personally i think Kings Ave is faster.

I hope you enjoyed your visit overall. Did you enjoy walking back into work? Did you prefer it over Melbourne?

Ohh. I assumed it was nearby because they gave us the voucher. So that makes it doubly useless then.

Yep, we shopped at the Kingston IGA. I think the cabbie took the Kings Ave bridge.

I wish they’d build those bus shelters in the neer suburbs – we’re stuck with boring old rectangular ones :(