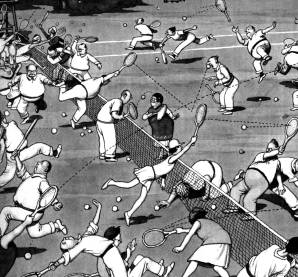 I dreamt I was the coach for the local junior football team. Instead of playing on a conventional oval, it was a kind of L-shaped ground, like two ovals stuck together, possibly reflecting a park nearby to the house I just bought.

There was a game going, but only about half a dozen kids playing in this huge ground. The umpire decided it needed some pepping up, and arranged for several more sets of goals and balls to be added to the game. This was done (apparently by magic), and then lots more players appeared too.

It looked a bit like a football version of Heath Robinson’s “Multi-Tennis” cartoon.