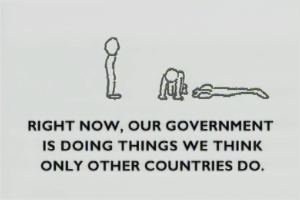 Right now, innocence is being taken by faceless government bureaucrats.

The Age: Back at school after being illegally detained

Immigration officers arrived unannounced at Stanmore Public School in March and removed Ian Hwang, then 11, and his six-year-old Australian-born sister Janey, after their Korean mother was arrested arriving at Sydney Airport with a false passport.

The family was released from Villawood on Wednesday night after more than four months.

… Ms Byers said her client denied that she asked for her children, who had been living with their aunt for three months while Ms Lee [the mother] was in Korea.

IAN HWANG: I never want to go to a place like that ever again. It was really bad. I had to go through some really bad things, like where someone tried to commit suicide.

MICHAELA BYERS, FAMILY LAWYER: He’s spoken to me about his feelings about being detained and about how hopeless he felt. And he’s been deeply affected by witnessing the attempted suicides to the extent that he was contemplating that himself.

I can scarcely believe this. Did this happen? In my country? Officials from the government — MY government — did this? They didn’t check? They just went in, took the kids from school, and locked them up for four months?

Can it be that we have got so rabidly paranoid about illegal immigration that we’re now locking up children with no reason, apparently with the intention of deporting them as soon as possible? Perhaps the mother was on shakey legal ground, but they were cared for by the aunt. The younger sister was born in Australia fer chrissake.

I saw a little footage of Ian, now 12, on the news last night, being greeted back by his schoolmates. The poor kid must have lost the last vestiges of his childhood over the past few months. What the hell is going on that this kind of thing is happening?

More coverage of this story, via Google News

Totally agree Daniel. Regardless of the ineptitude or wilfillness of the department, after seeing the lad on tv, it clear he is an Aussie and will go to make a life here that will benefit this country. Locking up kiddies who have not done wrong is reprehensible.

People need to learn that the whole welcome to australia multicultural thing is just a farce and if there’s any gap in your papers or some other reason for you to not be here, you’re made to want to leave. Hopefully they will get the hint.

That’s why an Australian ID card is such a great idea!!

Anyone without an ID can be legally deported. That way, there can be no complaint from people like Solon, Rau, etc and Sen. Vanstone and the people from the department of immigration can sleep soundly with a clear conscience.

Why do you hate America?

Why do you hate freedom?

Australia: Love it or leave it.

Vivian Solon had an Australian passport and was still deported.

Unrelated, but there is now a chalk portait of Billie and the new Doctor at Southgate next to the old drawing of the old Doctors.

Anyone seen Rabbit Proof Fence??? Seems our pollies’ mentality is still back in the dark ages. Wonder if they are planning on re-introducing the language tests of past – you know the ones where you could be say Chinese and they’d ask you to take a test in Russian. Maybe the “White Australia” policy has come back and I just didn’t hear about it.

An even worse idea to contemplate is that the pollies and the departments they authorise and manage (is that the word I’m looking for?) are telling us – even as they carry out these draconian activities – that the terrorists will never win!

It sounds to me as though they already have.

Daniel – over here in Texas I hadn’t heard of THIS one (but we have some dumb stunts from our government too). Question: any follow up? Did any heads roll?