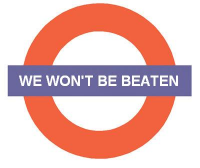 Helping to make stoicism the media’s most over-used word of the week, Londoners continue to show their defiance against terrorism:

I’ve been asked several times by members of the public whether I’m scared to drive my train now. I answer that we can’t allow ourselves to be beaten. — a District line tube driver

A letter to the terrorists, from London: …if this is a message to Tony Blair, we’ve got news for you. We don’t much like our government ourselves, or what they do in our name. But, listen very clearly. We’ll deal with that ourselves.

Inevitably with all the attention, some in Australia are showing signs of London news burnout. The media coverage was nonstop over the weekend, and continues today, with many personal accounts now being told. It’s at a level which you simply don’t see for many comparable incidents in other countries.

This is understandable — a sizable number of Australians either have direct descendants from, and current relatives living in Britain (as I do), or have friends who are either currently in or have recently stayed in London. Our parliamentary system is from there, world time is based there, our head of state is from there, a substantial amount of our TV, literature and music is from there. Britain, and England and London in particular are very high in the cultural consciousness of most Australians.

But the next important question is this: various leaders across the western world are proclaiming they will not give in to terrorists and will preserve our freedoms and way of life… But will they now erode those very freedoms by making us carry ID cards, and giving the security forces sweeping powers of arrest?

7 replies on “This is London”

I’m sure they’ll try, and probably succeed, look at the USA’s PATRIOT act.

Doesn’t meen we have to give up trying to stop them, I don’t know what the Oz ID card proposal is like, but the UK one is draconian and hugely expensive.

Um. I am from the US and just read the interview with Phillip Ruddock. I am not familiar with the 7:30 report. It looks to be a serious show.

So my question is… Is this a spoof? Gawd I hope so. It is pretty funny if it is but if it’s not it is very scary. We live with the US Patriot act and abhor it.

Its a level that you don’t see for comparable incidents in __London__!

Check out this link for a list of terrorist activity in mainland UK over the last 30 years. Its really no wonder that the average Londoner is a little blase’ to the whole thing.

I’ve got to say though, that I was horrified at the British media leaping on the “Islamic terrorist” bandwagon, without a single mention of the IRA (which, statistically speaking, is much more probable). I expect it from politicians, and “The Sun”, but not the BBC….

Nancy, the 7:30 Report is a serious programme, but the transcript I linked to was one of their regular satirical interviews. So while it was a joke, it’s commenting on some very real legislation.

Are we allowed to make jokes yet, because it seems the bombers were Monty Python fans. Why else would they board their train to London at *Luton* ???

The terrorists do start to win if the threatened (and I use the word on purpose) ID card comes to fruition.

On the other hand, if they’re going to turn the Oz Passport into a “smart card” beastie (somebody’s news last night [18-Jul-2005]) – at significant extra cost per document – why not just issue one to every Aussie instead of just current passport holders who bother to renew, and get the same result as the proposed ID card but possibly keep the “per each” cost of passports down just with “economies of scale”?

Oh, no, I forgot – that’d take common sense. Pollies and common sense – what a concept! rotflmao!

I think this is all the government can come up with to capture the terrorists. What else can they do ?