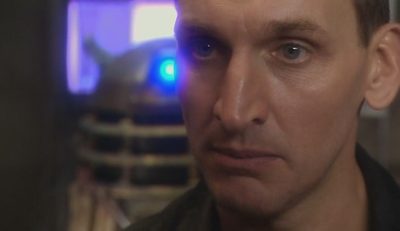 1. Rose — A harmless romp, introducing the characters and concepts for new viewers, and reminding us oldsters too. Thank goodness not too much emphasis was on the baggage from the old series, something the 1996 telemovie fell victim to, thus alienating half the audience.

2. The End of the World — Through Rose, we are introduced to time travel, and the aliens of the universe. There was nothing terribly deep about this episode, but it did touch on Rose’s sudden realisation that she was a long way from home, dependent on a stranger.

3. The Unquiet Dead — A bit of a horror story, with Charles Dickens thrown in. I loved the bit where Gwyneth was picking up visions of Rose’s background. Some great imagery with the “ghosts”.

4. Aliens of London/5. World War 3 — The first few minutes covered some ground which the old series never really touched on: what is the impact on loved-ones when someone just disappears for a year? Rose’s mum has been putting up Missing posters, her boyfriend has been repeatedly questioned by the police. This gets overtaken by an alien invasion, and I really enjoyed the faux news coverage. There was much outrage from some old school Doctor Who fans at the fart jokes, but it was all in keeping including a few comic moments in the series. A poke at the Weapons of Mass Destruction got a laugh from me. I’m not convinced the alien monsters quite worked, and while it was fun, this story wasn’t deep, and it didn’t quite feel like it was worth telling over two episodes.

6. Dalek — The return of the series’ most popular/feared enemy was always going to be a big event for seasoned viewers. No mucking about, this showed just how evil, cunning and formidable the Daleks are, tricking Rose, then using the sucker, draining the power supply, consuming the Internet looking for information, then single-handedly accounting for almost every human on the base. Nasty stuff, making up for past appearances which had watered down their power.

But then the plot pushed further: via some slightly clumsy techno-babble, the Dalek was contaminated with Rose’s DNA, and got emotions. Like a rabid Klansman discovering he has a black father, it was horrified: “I can feel so many ideas. So much darkness grows. … This is not life. This is sickness. I shall not be like you. Order my destruction!”

Simultaneously we explored the Doctor’s past: the apocalyptic time war which wiped out his people. So when the final showdown between him — the last Timelord — and the last Dalek happened, he found it difficult to cope. I found the last few minutes quite gripping.

7. The Long Game — The year 200,000. I know the Doctor said the technology was out of date, but he reckoned only 90 years. This just didn’t seem realistic to me. The year 3000 might have been more believable. This episode lacked anything too deep, just a straightforward look at the power of the mass media, and the amusing disposal of companion hopeful Adam [Click], emphasising why the Doctor chooses to travel with Rose.

All in all so far, a great return to an old favourite. Executive producer Russell T Davies and new doctor Christopher Eccleston have done extremely well. And some very promising episodes yet to come, too.

(See also: my review of the second half of the season.)

Yes, yes. I’m very much enjoying the Who and I agree with you. Pissed about his quitting the next series – which means I probably won’t watch it anymore because they will, in all likelihood, rework the character to not be so nuts (go on, he’s NUTS in this series!) and not nearly as much fun to watch. And I’m still getting teased over getting all sniffly during that Dalek episode. /pathetic. Though the aliens one wasn’t worth telling over two episodes. Dalek was. It would have been worth them explaining his/their history a bit more.

All fair calls. I think though the best episode of the new series, and possibly EVER, is “The Empty Child” and look forward to your 2nd half reviews.

Actually, for some reason, the Dalek story didn’t quite do it for me. Something about the pace of it all seemed a bit … off. Might just be me.

I’m with Doug RE: the Dalek episode. I thought it was just me and being unknowing about their history and such that it didn’t work for me.
Still, as a non-Dr Who fan of anything prior to the current series, I can happily admit I love these new eps. It’s a great show and Ren is right – Eccleston is brilliantly nuts and wonderful with it.
Looking forward to your 2nd half of the season run down.

Nice synopsis Daniel, and you are really going to love the next 6 episodes, it really does just get better and better.

Ren, the Doctor always had a manic streak to him, watch the next series and give it a go, David Tennant might just pull it off.

What about the Big Bad Wolf? It is mentioned every episode – what is that about?

Doug: yeah, the pacing has been an issue with these single 45 minute stories.

Lyn: I’m not going to give it away here… the rule here is no spoilers for Australian audiences. If you really want to know, look around the Net.

I watch it religiously every Saturday and find myself glued to the TV. But overall I have found the new series just too un-Dr-Who’ish and not as good as the old series – at least those I watched till the end of the Tom Baker series – before the BBC budget cuts. Really wish I could get home in time to watch the old series (yeah OK I could record it but that is not practacal for other reasons.)

The new episodes are just too fast paced, have too much action and too much special effects. The emphasis on things like science, strategy and intelligence is much diminished over the older series. It’s still there in a sense but really glossed over. The use of blue glow is already getting irritating. And the tardis interior may look impressive but is really very silly from a practical view.

The dalek was great and really did seem to ooze evil. Most of the cast are excellent. In particular Eccleston whoever plays his assistant are great. The coverage of how the people around him are affected was a good idea, and it is nice to watch a successful series in my nearly 40’s that has been going as long as I can remember.

I have been waiting for Daniel to write up something so I can offer my own opinion too.

Re: “What about the Big Bad Wolf? It is mentioned every episode – what is that about?”

Since I’m in the United Kingdom – and therefore have already seen the episode – I know what the relevance of the Bad Wolf is. But I’m not going to spoil it for anyone who hasn’t seen it. All I’m going to say is, watch the final episode of the current series.

I’m just ecstatic that my 11yo can now watch Dr Who with me, and episodes NEITHER of us have seen to boot!
He enjoys it immensely (just like I did at that age), so I don’t notice any of the “differences” you guys mention.
And we LOVED hearing “Would you mind not farting while I’m talking” delivered to the PM!!

This comment relates a bit to your earlier posting RE whether you should let your young kids watch the latest Star Wars movie. My two (aged 10 and 11) had nightmares after the first WW2 one :-)
Despite this it has been the family fave to watch, roll on series 2