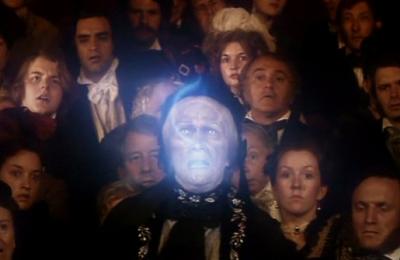 Saturday night’s Doctor Who is a scary one for kids — The Unquiet Dead — which the BBC got some flak over, and seemingly prompted them to set up a panel of four children of varying ages to watch with their parents and rate the “Fear Factor” for later episodes. Have a hiding place behind the sofa standing by.

But it’s great stuff. The writing, acting and production values of this new series are, with a contribution from the passing of time, putting increasing numbers of the old stories to shame.

And just who or what is “Bad wolf“?

9 replies on “The Unquiet Dead”

Oooh – this Doctor Who post reminded me to tell you that I watched the first episode when it was on the telly a few weeks ago (was home on a Saturday night) and really quite enjoyed it! (I’d watched re-runs throughout my formative years, so I’m not new to the tardis or darlecs etc., and I have a scarf that reminds me of that very long one that the shaggy doctor used to wear …) The wheelie bin coming to laugh made me laugh and cringe at the same time! Overall I thought it was a good episode and I enjoyed watching it. If I happen to be home on a Saturday night again, I will watch it, but otherwise I may have to borrow those burned DVDs you have sometime in the future …

When did you change your logo bit at the top?? (Just noticed it) Who’s the old guy – an important colonial? Am I imagining the change? I’m a bit slow to realise these things sometimes …

Quite liked that episode.

Trish… that old guy is actually Charles Dickens from the same episode of Dr Who that Daniel’s talking about here. He’s really quite an entertaining character.

Watch out for bad wolf graffiti in the next episode.

Bad wolf is the name of episode 12 of course, so maybe you need to wait for that. I’ll see it next week of course (big grin)

How on earth did you find out about that domain name though? especially as there is nothing there.

Ahhh … thanx, Ren. I thought it was more to do with the Diary of an Average Australian element of the blog than the Doctor Who post. Silly me …

The new series is amazing, isn’t it? I’ve been watching pretty religiously in the UK.

Some episodes I’ve felt a little “Blah” about – the Dalek one in particular I found rather uneven.

Still, “The Empty Child” (upcoming in Australia) has to be possibly one of the best Dr Who episodes ever: scary as hell, and I can’t believe the London blitz has never been used as a Dr Who setting before now.

This Ep of Dr who is by far the weakest of the ones I have seen. Why you may ask? Plot holes Plot holes Plot holes. Right from the start the re-animated cadaver kills a nearby human to create another vessel for a colleague fart alien (ok cheap shot, but they are made of gas). The two people who have this vital information at no time think to pass it on to the Doctor. With the knowledge that these farts are a bit impatient and are not waiting for people to naturally die before possessing them is a major issue; if the Doctor was made aware of this, I am sure he would not have engaged so readily in assisting the Farts. I was also not satisfied as to why the Farts would still follow through on the cadaverÃ¢â‚¬â„¢s last thoughts / itineraries. I mean why go to see Dickens when you are a Fart and not the actual old woman reanimated? Unless DickensÃ¢â‚¬â„¢ dissertation was going to be so bad as to kill various audience members who could then join the farts of the damned? But the Dr Who Franchise has always been like this, some stories are written extremely well whilst others are obviously the product of tight deadlines and BBC budgets. Sorry for the lengthy post.

Bandito: Whoa, you expect flawless drama in 45 minutes at 7:30? I’m just enjoying these episodes ‘cos they’re fun. As for the farts, keep watching…

Doug, thanks for not spoiling any episodes not aired here yet!