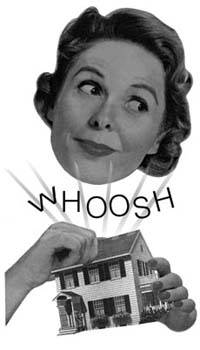 Review: The End of Suburbia. I saw this at a PTUA screening to about 60 people a week or two ago. A fascinating film about the consequences of the forthcoming shortages of oil and natural gas.

The film is North American-centric (as you can tell from the subtitle “Oil Depletion and the Collapse of the American Dream”), and so the problems of natural gas running out and its extensive use in electricity generation in there, don’t apply to us, so we’re not in as deep doo-doo in that department. (Though of course our electricity generation is filthy.) But we’re pretty much in the same creek in regards to the peaking and subsequent decline of oil production.

Suburban low densities and form aren’t quite as bad in Australia as in the US, but there are definite similarities. I liked the comment that new suburbs are named after the natural features that they destroy.

The film paints what I think of as an alarmist view of things. I suppose it’s trying to get people’s attention, but I find it hard to believe that the car/oil industry, with its billions of dollars of resources, will just roll over and let itself self-destruct. Will it fight back, and find some other way of making its profits? Not sure.

The conclusion of the film seems to see urban design as the main solution to lessening the impact of these coming shortages, almost assuming that many people could live and work almost entirely within their own suburban neighbourhood. Thus it skirts over issues such as public transport, which I think is a shortcoming — even with advanced telecommunications, people will still want to travel within their cities for work and play, and they won’t be able to do it all by walking or cycling.

A very interesting film though, which raises some important questions about the future of western cities.

4 replies on “The End Of Suburbia”

Well, good for the film maker. Actually my brother works in the oil industry in Texas as an engineer. He’s been project manager for a low-sulphur content gasoline product. Apparently it’s good for the environment. Ever notice what vehicle sells the most? The most gas INefficient vehicle out there -> the S.U.V. People may say “we want to save the environment” but do they “really” mean it? At times, I wonder….

It’s not the automobile industry’s job to save the world from economic collapse, hence they are still selling SUVs, and average fuel economy is actually getting worse as a result. When the winds change, those with the capacity to do so will pump out whatever they think their dealers can sell.

In the meantime, it’s worth noting that GM and Ford are both near bankrupt and their credit ratings are at junk bond status.

I just love this quote – ‘ABN AMRO says GM and Ford have huge costs for funding workers, “which are the car makers’ biggest burden, bigger even than the fact that they make crap cars”‘

Let’s say the winds change, GM and Ford will soon be history, their plants shut down, and concurrently there’s less demand for cars. Will anyone be in a rush to buy their plants that mostly build SUVs, V6s and V8s, and keep production up in a significantly declining market? Nope, that capacity will simply go and not return.

Other smarter car makers will go a little nuts and will try hard to stay relevant and produce stuff they think the market will buy, but their stocks will still take a good beating and they may lose their ability to raise capital, which could cripple a few more of them. Those that remain will probably be those that specialize in small cars and have excellent fuel efficiency, and there’ll probably be enough niche demand to keep those companies very happy.

Other than said survivors, what’s left will be spare parts manufacturers, fuel saving device retrofit con artists, LPG conversion places, and a marketplace that’s generally starved of credit and will mostly have to make do with the vehicles it owns.

If you can’t afford an efficient car (and few could in this scenario), you’d either use the vehicle you’ve got at any price, you take the bus, you move closer to work, or you try and get a new job. The sanest scenario would be PT, if it is actually possible to get from A to B on PT.

Unfortunately, we have a long way to go in that regard.

Rising petrol prices demonstrate the need for both the Victorian and Federal Government to provide a tangible and permanent commitment towards public transport.

Australia remains the only Western nation where the Federal government provides no consistent funding towards public transport infrastructure.

Of course however the State Government must be held accountable for its failure to dramatically improve public transport – particularly the lack of frequent and evening bus services within the outer suburbs.

With just 18% of Melbourne bus services operational on a Sunday and even less operating during evenings the State Government must finally commit to rectifying this social, environmental and economic inequity.

I recently spent 4 weeks in the United States and I was appalled by the huge waste of all resources by the Yanks. People liberally splashing water around in Los Angeles, a city which does not have it’s own water supply and relies on water from other states. When enquiring about water restrictions, the blank stares made me think for a minute that I was talking in a foreign tongue. A ratio of about 50/50 for sedans vs 4 SUV’s, not to mention the number of Suburban mum’s driving around in Humvees for god’s sake. And they don’t stop the consumption when they retire – it’s then onto fueling their “motor homes”. I know we are not perfect but I’ll take us any time.

I think a surcharge on 4w’s would be a good idea to start with and that surcharge to be put back into saving native forests, etc. Maybe some would then think twice if they had to pay annually for the privelege of driving round in their monster cars.

And a final comment, I spotted a black 4W this morning and was marvelling at how clean it was then wondered to myself if said vehicle has ever actually been driven on anything but asphalt. Hmmmm.