If you were listening to the radio on Tuesday afternoon after the state budget was announced, you may have noticed that it wasn’t me doing the media for PTUA… I’ve bowed out as my real work is getting too busy to be able to do media effectively. Chris did the budget comment, and did a great job. (And yes, at least one outlet misspelt his name.)

Transport and environment groups aren’t happy with the budget on the transport front, principally because two-thirds of the new money for transport went into roads.

But Daniel, I hear you cry, that’s fair isn’t it? More than two-thirds of travel is by road, so roads should get the bulk of the money!

Not quite. The budget builds on Victoria as it is now — it takes today’s situation and pledges new money to build on today’s transport network. 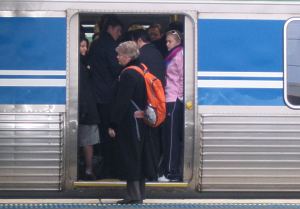 For example, suppose you have a road that gets congested. And you have a parallel train service that gets overcrowded. You have a limited amount of money, and you can widen the road, or you can put more trains on. One or the other.

Which should you do? Widen the road so more people can drive, or put more trains on, so more people can catch them? For either, any fix may be temporary, as demand slowly grows and eventually again reaches the limits of supply. But one outcome is environmentally friendly, cheaper and safer for the participants. The other is the opposite.

The government says it wants to boost public transport use to 20% of motorised trips by 2020, about double what it is now. A fine goal.

But this is just rhetoric. If they really wanted to achieve it, they’d be doing something about public transport, would they? Until they provide usable services into every suburb — and in most cases upgrades to make PT usable are cheaper than the equivalent road projects — it’ll never happen.

It’ll never happen Daniel? I have a dream. One day a state politician is going to stand up say our road system is a mess. We can build more roads, but they will be a mess too eventually. We are now going to try something else. We are going to spend a lot of your taxes on providing you with a great public transport system. It will be so good, you will forget why you ever needed a car. The roads will be for local delivery trucks and vans and a few taxis for those who can’t get out of the habit. If you want private transport, then we will almost tax you out of existance. The rest of the world may envy our trams (they don’t have to live with them) maybe we could be the envy of the world for our public transport. It could be a dream, or it could be a forced decision at some point in the future.

Oh dear – now I feel ashamed that when I was talking to Chris at a party last weekend (having no idea that he did this in another life) I mentioned how much I disliked taking the train to the city in peak hour, and how I’d prefer a job in the suburbs I could drive to.
Now, if I knew he was on the PTUA we could have got into a really enjoyable discussion there!!

The view from the outer east:

For a budget had the overall theme of making Victoria a fairer place to be why then was public transport neglected?

Why was there no announcement towards new public transport infrastructure including the Doncaster Road tram extension (supported by both Boroondara and Manningham Councils) and an honouring of the promises made to deliver the full Knox tram extension, the third track to Ringwood and the South Morang Rail extension?

Why then are general bus service improvements only allocated $45 million over four years (a mere $11.25 million per year) and why must residents of the outer east be kept waiting three years just to enjoy evening and public holiday services to Knox City Shopping Centre, despite the fact that such improvements could be introduced almost immediately?

Where are the Sunday or evening bus services along our major roads which are required to make Melbourne’s Outer East a fairer ‘place to be’?

The sixth budget to handed down by the BracksÃ¢â‚¬â„¢ Government does nothing more than belittle the bus dependent of Melbourne. If basic mobility cannot be assured how can people fully participate in society?