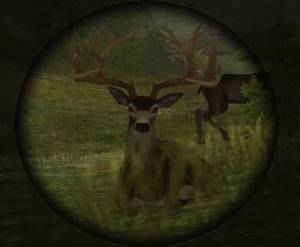 I hadn’t noticed this before: you can now get a deerhunting game for the XBox. Obviously there have been 1st person shooter (FPS to those in the know) games for quite a while now, usually despatching alien monsters or WW2 German guards into the afterlife, but this is the first time I recall seeing a modern-day video game based on blowing away animals.

There have been various cruelty to animals games before, all the way back to Whack-a-mole and those arcade ducks, but video games are more realistic than ever before. Apparently this one actually features you hunting 9 different deer species, including exotic and rare deer. I wonder what PETA think of this? On the one hand maybe it’s better for the hunters to be killing pretend deer, but on the other hand, is it glorifying hunting, and encouraging more people to take it up?

I wonder, is it Game Over or do you at least lose points if you accidentally shoot another hunter? Do you have to avoid others’ bullets without shooting back? Can you opt for your character to wear a bright orange safety vest? What next… a fox hunt game perhaps?

10 replies on “The virtual deer hunter”

In addition, there’s a game out where you can hunt prairie dogs. Yeesh

When you’ve bagged yourself a deer, the game should make you tie it to your roof-rack, take it him and gut it etc.

Oh that’s so wrong. Fair nuff, you wanna do it in real life, then get out there and do it, and face up to the protesters and pay your licence fee and etc etc etc. But this? Ugh! Makes my stomach turn!

There are also games called something like Deer Hunter Hunter. You play the deer, and try to kill the hunters. Similar games, just with a more humourous perspective.

The best spin that can be put on this is that while people are doing it with games, they aren’t out there doing it in real life……..and hopefully they clearly disassociate the two.

Actually – there has been recent stories from the States about an outfit in Texas that lets you shoot real animals form the comfort of your own PC. No kidding!
http://www.latimes.com/news/local/la-me-liveshot21apr21,0,4157569.story?coll=la-home-headlines

Deer hunter games have been around for years. They are out for all consoles and have been out for PC’s since the 90’s. They are pretty solid sellers too.

Its alright for kids to be able to kill other humans in violent and realistic games like “grand theft auto”, “max payne”, “hitman” ect, ect. But it’s not fine to play a hunting game where you shoot game animals that have been hunted for centuries??? Why don’t you “protesters” get over it and get a life!!!

Who said it was alright, Kov?

And who was protesting? I was making an observation.

BTW anybody who uses the phrase “get a life” and three exclamation marks needs to get a life.

Children are taught that murder is wrong, therefor I think they have the abilty to make the connection between a shoot’em up game that uses human victims. Unfortunatly, most children are not taught that killing animals is wrong, in fact, hunting is not illegal, so why would they make a connection? I just hope that some of the people who play these hunting games don’t decide that they should try it for real–just for fun.