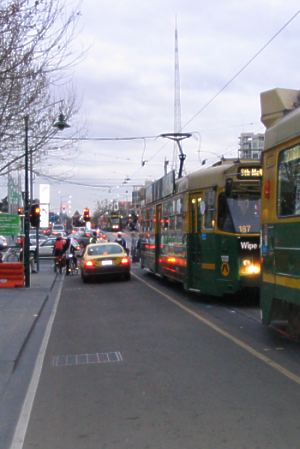 On Tuesday night Melbourne City Council approved a plan (by the narrowest of margins) to build four new tram superstops along Collins Street. Fine, very good, wheelchair accessible, more pleasant to wait in and use than safety zones. But they also plan to close three stops: at Queen, King and Russell Streets.

We’ve had a tram stop every block in the CBD for over 100 years. It’s simple to understand, it’s logical, it makes life easy for those who don’t catch trams or go into the city very often. Now unless you know it off by heart, it’ll be guesswork knowing which stop to get off at.

The motivation is to speed up trams. A worthwhile idea, certainly. But you know what… even at those intersections where they’re deleting stops, there’s going to be absolutely no traffic light priority. So there’s a 50% chance (higher at King Street) that the trams will have to stop anyway. The same thing already happens outside St Paul’s Cathedral in Swanston Street.

And all because the MCC traffic engineers objected to tram priority, or even shortening traffic light cycle times because it would slow down cars. Obviously they haven’t got it around their heads that 1.1 (average occupancy) people in a car is not as important as scores of people in a tram, particularly in the city centre, where there’s so little road space and so many people to move around.

Don’t think they’ll stop there. Plans for Flinders Street and Victoria Parade reveal more stops to be deleted. Seems as though they want to chop a third of stops out right across Melbourne.

9 replies on “More tram stops for the chop”

It is most concerning that the City of Melbourne paid little heed to the benefits of traffic light priority for trams.

Overseas examples demonstrate that the way to speed up tram travelling time is to provide priority for trams at intersections not through removing stops.

What is the point of removing a tram stop when trams will still be caught with a red light at each intersection?

Presumably there will have to be traffic lights installed at the new stop locations to allow passengers to cross safely to the stops. So this solution will actually delay cars more than now as they will have an extra set of traffic lights in each city block. Lose, lose all around.

I don’t get it, I really don’t. They’ve got the new signalling measures in place now but that Collins/Queen Street stop is an extremely popular stop. So is the Russell Street one considering that’s just down the road to the Greater Union cinema. Sucks. Majorly.

Malcolm, no extra traffic lights. The William and Elizabeth St stops will be at the intersections anyway. The stop near Exhibition St won’t be, but that will have pedestrian/zebra crossings (one in each direction) like at the stop near Spencer St.

I guess I should have looked at the proposal before commenting.

A pedestrian crossing at the Exhibition St stop is much less safe for passengers.

Do passengers really worry about saving an extra 3 minutes of travel time? I would think that they would be more concerned with frequency.

But was it not also on Tuesday that they trumpeted the arrival of the Control Centre, which would allow them to control Traffic lights to give trams priority?

I understand the desire to speed trams up – it takes almost as long to get from Spring St to Spencer as it does to get from Nth Fitzroy to Spring St – but giving cars priority over PT is insane!
When several cities around the world are activly discouraging (London) or banning (Freiburg) cars in the city centre, our leaders are making car travel a priority in policy.
The really disappointing thing is that they truly believe this is a good thing for PT. It makes me mad!
Oh, and bring back Connies!
Sorry for the rant everyone.

I should say (re Malcolms comment on travel time) that the PTUA is fully supportive of speeding up trams. Apart from saving passengers a minute or two, travel time savings can be leveraged off to improve frequency without having to put more trams on the road (they’re $3m a pop, remember).

just another example, common sense is surgically removed when somebody enters politics….

Funeral for a tram stop

Following the decision to close tram stops in Collins St, Flinders St and Victoria Pde, and expectations that more will follow, there will be a funeral for tram stop 7 at Russell and Collins Streets on Monday: