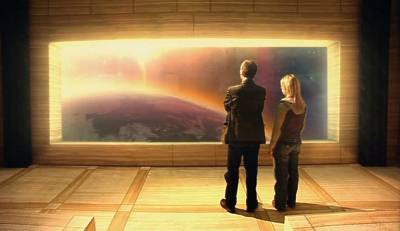 The ABC has finally announced it will show Doctor Who, starting in May (I’m betting 7:30pm on Saturday or Sunday nights). Meanwhile a new study has shown Australians increasingly downloading TV programmes via the Net, and I think it correctly identifies the cause: viewer frustration with the time the networks take to broadcast overseas programs.

In the case of Doctor Who, the Canadian Broadcasting Corporation showed the first episode only about a week after its British premiere. Likewise, Channel 10 is showing new Simpsons episodes shortly after their US premiere. There is no good reason Australians to have to wait weeks or even months.

I don’t think we’re yet at the stage where downloads are in the mainstream, threatening TV ratings (and therefore risking shows never being funded to be made). It’s mostly geeks and hard-core fans (or both) who have taken the trouble to figure out how to use BitTorrent and find the downloads. And the hard-core fans will tune in when it airs on TV anyway.

But as the technology improves and broadband spreads, it’s only a matter of time. Broadcasters need to realise consumers don’t want to wait. We’re in the global village now, and if our neighbours are seeing new episodes of our favourite shows, and the worldwide media are buzzing about it, then we want to tune in too.

11 replies on “TV in the global village”

So I wonder how long it’ll take before Hollywood starts trying to sue people in Australia like te RIAA has done back here.

Yes, there was some interesting reading in the Green Guide. You are right I think in that only a select few will download epidsodes of tv shows. You have to be very dedicated at the moment, but that will change. There is no reason why Australians can’t see shows at almost the same time. At least the movie gap has improved a bit.

A bit more, sorry. Because of the internet, we see and hear the hype for new stuff in US and UK. The local tv stations should piggy back on that.

To add salt to the wound, when ABC finally get Dr Who, they should broadcast it at 11.30pm on a Sunday night, or 4.45am on a Tuesday morning. For example. :)

Although I agree that the “global village” ahould be taken into account for release dates, and that would stop many casual downloaders, I think Dr. Who is a phenomenon that took many by suprise.

I don’t think even the BBC expected 10 million viewers for the first episode, and I don’t think Eccleston thought it would be so spectacularly successful. Hopefully he will now re-think doing a second episode.

And after all, although some in Oz have watched the first episode from a download or from a video being posted to them, does that really mean they won’t watch it again when it comes to TV, of course they will if they where such big fans in the first place.

Andy, don’t joke, about ten years ago, the ABC were showing Doctor Who at about 5am, though it was repeats.

Pete, the BBC hype machine was cranked up last year. While the ratings were higher than expected, the ABC has been broadcasting the show since 1965, and they should have been prepared to show it (or at least announce it) much earlier.

I think you have hit the nail spot on the head. Whats worse though is that the stations treat viewers with total contempt, shows will be run twice a week with liberal amounts of repeats randomly thrown in, shows will move randomly around different timeslots.

My best example though was with the latest series of west wing. Took 18 months to get here despite being consistantly award winning and a total of 14 of the 22 episodes were shown. Nine announced that at episode 12 it was the final of the series and then continued to show 2 more weeks of it before it disappeared silently

Something is really sick about a society where people can’t wait six weeks to see a new TV show. This is not a life-saving medical discovery, folks – it’s entertainment. Your head won’t fall off if you miss it. Take a deep breath, relax and find something else to do. You could start with a trip to BBC7 radio (www.bbc.co.uk/bbc7) where you can hear radio shows (including Dr Who) which were made up to 50 years ago. See, they’re still there. They won’t go away. And most of them are a hell of a lot better than the crap you’re hanging out to get hold of just ‘cos it’s new.

I don’t get your point Jon. There’s any number of things in western society that we can live without. Why single this out? And who says your taste is the same as anybody else’s?

i am in australia and pay tv (foxtell)cant get the ama motocross or supercross any more can any one help me and im hopeless on a computer.

check out http://www.mxsuperstars.com. They’ve got a forum there with links to the torrents for the MX show’s off OLN. You may have to register to see the download sections, I forget.