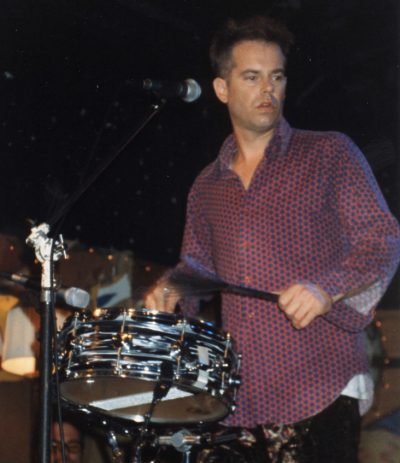 Update 8:30pm. I first read about this in the paper this morning. It didn’t quite sink in until later. It’s one thing when a musician much older than you passes away… it’s another matter when it’s one who is almost your own generation, and at only 46.

I never saw Paul or Crowded House play live, but I did see him some years ago, laughing and smiling, at the Elwood Beach House Cafe, which I think he co-owned with some other musician friends. I assume he lived around there; it was quite close to where he had gone to walk his dogs, and was later found, in Elsternwick Park.

To the slight indifference of my offspring, I dug out some Crowded House CDs and videos this afternoon to play them. The cover picture of their first album caught my eye, in the circumstances.

He will be missed.

I am so sad, I was in complete shock this morning when I found out.
RIP

I’ve thought of nothing else today. I bet they’re all rocking tonight in Hessy’s Shed in the sky. RIP

I just can’t believe it! I was walking around in a bit of a stupor all day when I heard. The whole thing just seems so unreal.

A very sad end to a most talented life.

This made me so sad. I listened to Crowded House on my headphones throughout a hideous trip to the US with my mother when I was 14 – they saved me! Poor Paul.
:o(

this certainly is sad. did they ever find out how he died? or what he died from?

i wondered, also, what happened to his dogs he was walking. did they realise he was gone when the dogs came home on their own or are they gone, too?