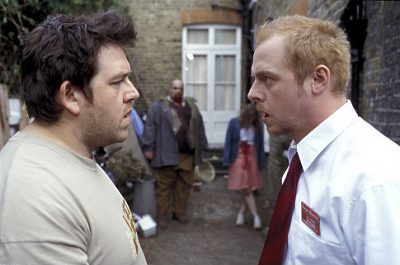 Somersault. Now maybe I’m going out on a limb here, since this thing won 13 AFI awards, but I couldn’t quite get into it. One of those films where you just can’t feel much sympathy for any of the characters. Maybe watching it on a small TV didn’t help, and maybe I wasn’t really in the mood for something so misery-laden, but it didn’t do much for me.

Shaun of the Dead. The funniest movie I’ve seen in ages. Not quite as peurile as Guest House Paradiso, but almost as silly, and certainly with a more rivetting plot than Somersault.

Heh, we watched this on the weekend too. You can add another thumbs up to your review.

I saw Saw this weekend, made by a couple of Melbournites (just to give it some relevance to you). I’m normally very good at guessing whodunit, but the ending of this one took me completely by surprise. But, as they show you in in flashbacks and tell you in the director’s commentary, the clues are there.

I saw Somersault on the big screen … and I would still give it the thumbs down. if anybody got the point, I’d love to hear it!

Shaun of the Dead is really great. If you want to go to a pub that is just like the Winchester Arms, I recommend the “Pint on Punt” in Windsor (opposite St Kilda Junction.)