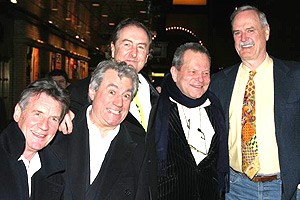 There was a terrific picture of (what’s left of) the Monty Python team in the newspaper on the weekend.

I know there’ll probably be a collective groan from readers, but it inspired a brief dream overnight in which Terry Jones came around for tea, chatted with my mother about his TV appearances, and agreed to have his picture taken with me sitting on the couch (posing as if we were a couple), but as the camera snapped away, all the family kids kept running into shot.

I can see why your mind decided you’d dream of what you dreamt of, but I’m puzzled as to why you and Jones had to pose as a couple for your Mum’s camera… Where did that bit come from!?!?

not at all Daniel. I always enjoy hearing about your dreams. And it goes a long way toward helping me analyse mine.

What an awesome shot. It’s so cool seeing them together though it’s a pitty that my favourite died some years ago.

Spamalot: My husband and I saw Spamalot in Chicago in December 2004. The show ran for about 6 weeks while the cast and crew prepared for their Broadway debut in NYC. Loved the show, BIG fan of Tim Curry, but I can’t help wondering: will the NY Broadway fans “get” it, or is it doomed to be a novelty, attended only by Python fans, and then it will quietly dwindle away. Oh, how I want Spamalot to succeed, I really do!

wow. they’re looking really old these days. reminds me that i’m much older than i think i am since i didn’t think i was all that young when they were younger.