Back in the late 80s and early 90s, when my interest in TV peaked, I spent some time procuring TV series well before their Australian debuts, courtesy of overseas contacts, twin VCRs and airmail. Thus I was able to see Red Dwarf series 4 and 5 only weeks after they aired on BBC2, albeit on slight fuzzy VHS tapes. Some of my fellow year 12 students saw the debut seventh Doctor Who episodes well before the rest of the country. Great title sequence, shame about the story. 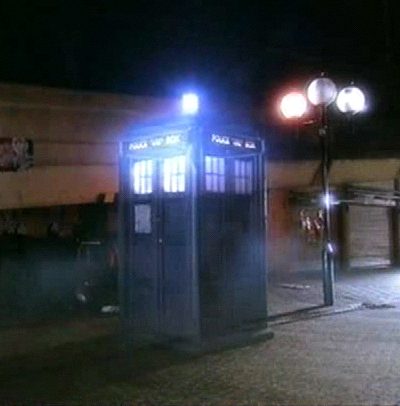 These days such trading is done digitally, and thanks to the joys of P2P, often without the participants even knowing each others’ names. And before any ladies reading scoff at the level of male nerdy obsession required for this kind of activity, I could name a number of otherwise non-nerdy women who in recent times have furtively traded VideoCDs of upcoming Buffy episodes.

This week Doctor Who fandom is abuzz with the news that the first of the new episodes has been leaked onto the net (check your favourite BitTorrent site). Being three weeks before the world premiere, it may be a preliminary edit, but many are keen to get their mitts on it nonetheless.

Of course, a stoush of the proportions of the Imperial vs Renegade Dalek civil war has developed, with some fans proclaiming intellectual property theft will be the downfall of the Beeb. Others are pointing out that apart from the UK, NZ and Canada, no other countries are known to be showing the new series anyway, so they need to get it somewhere. (Some say the ABC has bought it, but I can’t find any hard evidence of this.)

The leak of the episode comes just as the BBC’s own publicity machine ramps up, with UK trailers and a revamp of the website expected. Hey, maybe the BBC itself surreptitiously released the episode a few weeks early to get maximum publicity for the new series. After all, they are one of the most forward-looking of the old media corporations on the planet.

Inevitably other media outlets are picking up on the hype, with a fair dose of nostalgia for the old series — for instance this article (via Doug) in which Rachel Cooke recalls the episodes of the 70s:

…the lore of the series passed, almost without our noticing, into the lore of our family. … My father’s toolbox was not merely full of screwdrivers. It was full of sonic screwdrivers. The shed at his allotment was sometimes known as the Tardis.

And new Doctor Who executive producer Russell T Davies (best known for the original UK version of Queer As Folk) also reminisces, and nails a shared fantasy to boot:

When I was eight, walking home from school down Hendrefoilan Avenue, I always used to think ‘I could turn round the corner and the Tardis would be there – and I would run inside and I would fight alongside the Doctor.’ It was the one programme that encouraged you to make up stories. The Tardis could land in the everyday world and no other science-fiction programme would do that. You were never going to be a member of the crew on the Enterprise when you were eight years old: it was in the future and they were the navy.

Amen to that. I had the same thoughts while walking home down Greenmeadows Lane, Russell.

5 replies on “The Doctor escapes”

*LOL* at that comment about the non-nerdy women passing on the downloaded Buffy episodes! Why, that might be me and Miss Marita and others!

I asked ABC via their website ages ago what the go was and they said:

Thank you for your email regarding Doctor Who. Please accept my apologies for the delay in responding to you.

The new series of Doctor Who is still in production in the UK, and at this stage there is no confirmation that the ABC has secured the rights to broadcast the
new series. Please check our ABC TV website for updates:
http://www.abc.net.au/tv/.

I’m sorry I can’t be more helpful on this occasion but thank you for your interest in the ABC.

Trish, I wasn’t going to name names, but you’ve outed yourself!

This story has been covered by BBC Online News: http://news.bbc.co.uk/2/hi/entertainment/4328329.stm

Doctor who?
Actually, don’t mind the theme music. How did that 80s/90s version go?

I have also just watched the BitTorrent version. Hideously nerdy given I am in the UK – but I always seem to miss anything I plan to watch on TV.

I now cannot take the comments that it would be played straight and with a certain emotional realism seriously – but it was a good laugh with some genuinely creepy moments.

Billy Piper was significantly less irritating as a companion than I expected; in fact, was rather good!