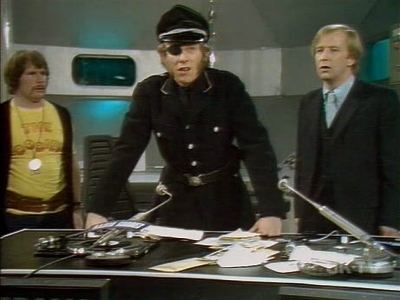 The Goodies name their favourite episodes (at least, of those released on DVD):

After watching the shows again, all agree their favourite episodes are Earthanasia and The End in which the three spend their time together in confinement and without their often wild film excerpts.

“Ironically they were brought about by the fact that we ran out of money at the end of each series,” Oddie says. “I actually think that some of those have stood up better than some of the film things.”

These are two of my favourite episodes, too, really bringing out Oddie and Garden’s superb dialogue-writing skills.

My favourite Goodies episodes (in no particular order):

Yup, I’ll be buying the new DVD release. Like the first one, it’ll sell like cupcakes in Australia.

Somewhere, possibly retired now, there’s an ABC staff member or two who were responsible for scheduling The Goodies constantly through the 70s and 80s, embedding it deeply into the memories of most Gen-Xers.

You going to see the boys in their show?

Here Here to the Goodies!
One of my favourite episodes was the one where they clone all the Rolf Harris’s (..’and don’t the kids love ‘im”). That and: “String string string string, everybody loves string….”. hehehe!!

I wish I could see them while they are here. They just don’t make ’em like that any more.

Alas, I can’t make it on the night they’ll be in Melbourne.

Is this the tv series where one of the characters had a survuval suit with deep pockets? Or am I surpressing my memories of the 70’s and 80’s?

My favourites in no particular order:

How I love the Goodies! I did love Kitten Kong – and I REALLY loved the episode with the boneless chicken. And ‘Don’t Cry for me Marge & Tina’.
When are they going to be in Melbourne?

The Goodies
Daniel writes about The Goodies better than I can – go and read it!…

kung fu kapers was my favourite., totally envious if you’re going to the show…

I hope they end up putting a lot of them onto DVD. When they were rerun briefly on the ABC in the early 90s, a certain person I know taped about 33 episodes. mmmmmm…

can someone please tell me which goodies episode has graham and tim in clockwork orange attire? I thought it was kungfu kapers but the recent version i saw didn’t contain it

It’s the moon rocket one “Invasion Of The Moon Creatures”, where Bill and Tim get captured by “Big Bunny” and get turned into rabbits. It’s not on any of the DVDs released so far.