It started with an observation from one or both of my offspring: “I’ve never been on a sprinter train!”

So I thought ah, one more week of holidays for me, I’ll take them on the train down to Geelong. They’re well-versed with travel on the suburban trains (it’s all part of my “Dad’s taxi”-avoidance scheme for coming years when they explore the world on their own) but we don’t venture onto V/Line very often.

But what’s this? Temporary Geelong timetable? All trains replaced by buses during works? Ah yes, the slash and burn approach to infrastructure upgrades. Pah, to hell with that. Shame though. No strolling along Eastern Beach, no sitting by the seaside eating fish’n’chips.

Revise the plan. Head east. Don’t even have to get in to Spencer Street to catch the train then, can pick it up at Caulfield. What’s the closest major town out of Melbourne? Check map. Warragul. Okay, that’ll do. As an acquaintance recently observed, compared to the metropolitan trains, the regional operator V/Line is like an old-fashioned railway. It has conductors, some with old-style whistles. This is good. It still has an arcane fare system. This is bad.

Lucky you still buy your ticket from a human not a machine, because they probably have hundreds of different individual fares depending on precisely where you’re starting out, where you’re going to, how many people are in your group and if they’re adults, concessions or kids. I thought I had it sussed out by checking their fares web page in advance, but the guy at the booking window triumphantly defeated me by pulling out the $6 “family saver” fares for the kids, thus saving me $7 and confusing the hell out of me.

Over to platform four to await the train, which duly arrived. The kids were thrilled to be riding in a Sprinter train, and this lasted for very nearly 15 minutes.

As the metropolis gradually left us behind I tried to perk up their interest by doing a kind of reverse “Simpsons go to Capital City” set of amazed observations. Look! Cows! Sheep! Hay bales! After that wore out, they entertained themselves by trying out the train’s water dispenser and toilet. 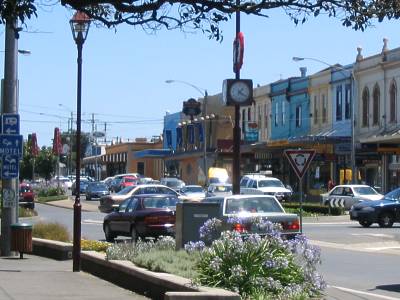 After an hour or so, we got to Warrigul, accompanied by exclamations of hunger. We wandered out of the station, through the park and up Victoria Street. A unanimous vote for chicken and chips overrode the earlier plan for fish, so we moseyed into Jayes Chicken And Chip Emporium.

My food ordering was critically flawed. The request for half a chicken was fine, but the large chips? Too large. A humungous number of chips. But what really caused problems was the failure to grab any cutlery on the way out of the door. Obviously I’m too used to those times when we get chicken and chips and take it home to eat.

At home, we have cutlery. In Warragul’s park next to the station (whatever it’s called) there is no cutlery.

We did find a picnic table, and spread the food out on it, then for the next 15 minutes as we ate, I pulled bits of hot chicken apart and shared them round. We got through perhaps 40% of the chips. The flies were loving us, buzzing around continually. When it seemed like we’d had enough, I made the last call for chips then threw what was left into the bin.

We’d just missed a train back, so strolled around the shops for a bit to kill some of the hour. Nothing terribly interesting, to be honest, the usual mix of country town shops, which are much the same as suburban shops. Back to the station to explore the waiting room, read the V/Line newsletter, and have pictures taken in the old ticket check booth. 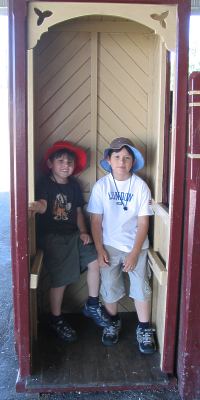 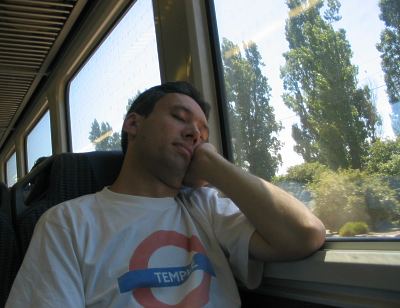 The train rolled up bang on time at 13:58 and zoomed us back into the city. I took the opportunity to have a little snooze. We got home by about 4pm, via ice-creams at the milkbar, having nicely filled the day.

14 replies on “Adventure in Warragul”

Have been doing likewise. Just did Bendigo just before the bustitution in a few days. Saw the tram but didn’t ride. But did see the GPO (great museum), impressed the telegraphist there, skipped the Chinese museum (as it wasn’t free), got a great personal tour of the Art gallery, had a sundae in the mall then home.

North or east is next step, though north would make sense as it’s in sequence; west to east, whereas you’re doing it the opposite.

In case you’re wondering – First or Economy? Travelled First and I was about the only one there (apart from those booted back to economy) and I couldn’t find the drinking fountains. So for people to talk to and drinking fountains, I’d go economy – not that much difference apart from slightly better seating in First.

Warrigal? Must be the south-east Melburnian version of the spelling. Time to dig out the old Hitachi desto rolls for the definitive answer!

According to the Melway, the road in eastern Melbourne is Warrigal. The town is Warragul. Thus I have actually misspelt it above, and will fix it (but I’ll leave the permalink alone). Perhaps two independent translations of the same Aboriginal word?

Cool thing to do. Good on you dad. I am sure your boys will have lots of cool memories if this is the sort of thing you do with them in the hols. Beats the ‘going to dad’s insurance office while he works’ memories I have.

What can I recall about Warragul? The road bridge over the railway bridge and below a long park along the railway line where they used to hold the annual Warragul show. Same park I guess. There was also a cafe that had the kitchen below ground level and the food came up on a dumb waiter. Fascinating to kids. Horrifying to kids was the hospital up on the hill with a huge chimney and we were told they burnt dead people there. It was probably for the boilers actually.

The last time I travelled on the Gippsland train, I had my own compartment complete with chemical footwarmers, a very dirty chain to pull to stop the train in an emergency and the train was electric. Pity kids nowdays don’t have the priviledge of looking down the toilet bowl at the passing sleepers.

Sounds like a lovely family day! What a cool dad you are. :)

Made a similar trip a few weeks ago. No kids, but rather EVERYWHERE as we have for over 7 years I figured the two of us could enjoy a train trip out to Outer Harbour… neither of us had ever been there before.

So trained into the city and then trained to Outer Harbour. Nice trip, was great to enjoy the scenery instead of driving, and nice company.

Then we discovered there is nothing, I mean NOTHING, at Outer Harbour. I REALLY mean NOTHING, we almost didn’t even get off the train… but we did, stepped onto the platform, reconfirmed there is NOTHING out there, not even shops, and got back on the train to head back.

Overall a wonderful day that, ultimately, had no destination. Will definitely do it again but this time pick a better destination (though with Adelaide’s rail network that means a whole 2 other options!).

I go on that train every two weeks to go to my parents and back to the city.

The 4.59pm train from Flinders St is one of the busiest services as all the office workers catch it.

I used to catch the sprinter services between Tynong and Pakenham, what fun they were. And I’ve finally mastered the art of the V/Net ticketing system (How most Country Fares are issued). Yes, there are a myriad of fares, but there are many discounts and loopholes to be had in the process. All fares, unless based off a period (Weekly, Monthly, and Yearly Point to Point, Date to Date tickets) are based off charging units – essentially kilometres, grouped by tens. So if you want to go 43km from say St Albans to Clarkefield, you would pay for 40 charging units. Rounded to the nearest 5, normally. You can view the fare scales on their website, or enquire at your nearest V/Line booking outlet.

And as you did all your travelling on one day of the weekend, you could have been charged for the Weekend Saver Fare for yourself (discounted weekend day returns) and the two little’uns would have been eligible for the Family saver fares (A flat $3 one way, $6 return anywhere in the intercity boundary (Kyneton, Sth Geelong, Ballarat, or Traralgon) for accompanied children. Seniors also get sizeable discounts.

If you travel out of the city during the week, or into the city after a certain time on weekdays you can also buy off peak fares, these are about 10% cheaper than standard V/Line point to point and return tickets.

Though it was a weekday when we went, not a weekend.

Oh dude… You missed out on all the greatness that Warragul has to offer you, the humble visitor.

We’re not called Waz Vegas for nothing, my friend… Warragul is quite simply the entertainment capital of the Greater Valley area.

Okay, that’s a filthy lie. Glad you enjoyed your stay regardless,

Time to fix your link to V/Line’s ‘fares’ page – V/Line has now redesigned their website and the link you provided is now a 404 error.