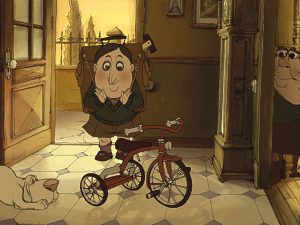 The Triplets of Belleville. French animation, with some very funny moments (especially from Bruno the dog), and some very dark ones too, which possibly make it too dark for kids, despite the PG rating. Keep watching after the credits (I wish we had.) Maybe don’t watch it if you don’t like frogs… Great stuff.

Japanese Story. Toni Collette in a very un-Muriel-like role. Some scenery (both natural and manmade) which I bet looked spectacular in the cinema. A surprise event in the film that I sure-as-hell didn’t expect, and won’t reveal, ‘cos it really would ruin it. On paper the plot is about as simple as they come, but what makes the film is the human interactions. As long as you like that kind of film, it’s a thumbs up.

Japanese Story. Good movie. The scenery was spectacular in the cinema. The surprise part? Guess you mean when he…………

Triplets of Bellville was called Bellville Rendez-vous in the UK. Fantastic film with beautiful animation. If you like that sort of dark humour you would enjoy the live action French comedy/drama “Delectesen”.

Japanese Story – 4.5 out of 10. Marks for effort, but not something I’ll bother watching a second time. Probably more like a 3 or so but I’m a consummate fencesitter and wouldn’t like to upset anyone.

Japanese Story…mostly crap, I thought. Toni Collette was unecessarily unattractive, her character unappealing and the relationship storyline poor. There was enough West Australian scenery to form a promotional campaign but it was an excessive amount for the movie, which could have been shorter. Toni Collette’s response to the “surprise” was ridiculous and the ending of the movie dragged on and on infinitum. Sorry Daniel, thumbs down from me!