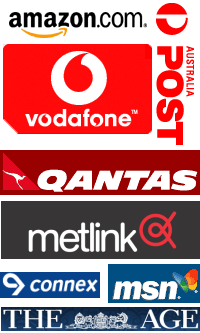 A name is a proper noun. Under the rules of the English language, proper nouns are to be written with capital letters. Obviously this kind of rule can be ignored for stylistic reasons, such as for corporate logos. But in normal writing, such as you might find in a newspaper article, that’s a rule which should be pretty much followed, right?

So what makes K D Lang so special? It’s fine by me if she wants to put her name on her albums in all small letters, but why has this got into newspaper articles? Is it a name, or isn’t it?

Metlink, Amazon and Vodaphone have logos with all small letters. Doesn’t mean we write their names in small letters. Qantas uses a logo with all capital letters (why may be reasonable — it was originally an acronym after all). So do Australia Post, The Age, and a lot of other companies. Does this mean their names should be written in all caps?

(Actually, Australia Post do call themselves POST in their own literature. Doesn’t mean anybody else will though.)

Update 6pm. Just to clarify: I have no problem with her calling herself “kdlang” on her albums, in her publicity material, web site, etc etc. I just don’t see why the media and others have automatically adopted her convention, ignoring one of the basic rules of the English language. I reckon it’s kind of on a par with the media pronouncing Colin Powell’s name as Colon…

I guess because it’s a stage name she can spell it anyway she wants to, same as a band name. They are like brand names in a way. On her albums she uses full stops after the initials which other sources usually omit. I like signing my name with small “b” too!

As (b)Barb has said, it is kinda like a trademark and it brings instant recognition when reading the name anywhere and there isn’t confusion with Mr. K. D. Lang, chairman of Acme Pest Controllers. Straight away you know it is THAT k d lang. We readily accept that she perfers for us to refer to her by her two initials followed by her family name (if it really is). Interesting one.

e.e. cumings she is not.

Though, doesn’t Ren’s comment point out, that maybe there is an exception for stage names? Referring to “k d lang” the artist, as opposed to “Ms K D Lang” legal person. (Reminds me of the difference between “PJ Harvey”, actually a band name, and “Polly Jean Harvey” the said band’s singer/songwriter.)

The only ‘to capitalise or not to capitalise’ that really frustrates me is when people write anzac or Anzac instead of ANZAC Day … I suppose you can use all three versions, because a bloke can be an Anzac or have the anzac spirit, but isn’t it ANZAC Day? And I know I’m a bit late, or a bit early, in the calendar for this question … I should ask the Australianist Historians that I work with, I suppose!

I get REALLY irritated by that ‘Colon’ thing. I mean, if we had no TV/Radio and were just getting new from the US via newspapers, everyone would just call the man Colin. Argh. Same with Ralph Fiennes.

what about e.e. cummings?

i’m not sure that i actually have a point (*snorts quietly in laughter at self*) i just thought of one of the few other famous names which i know are done without proper case.