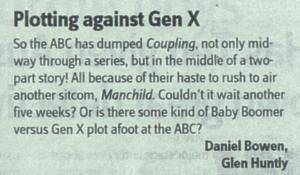 Coupling, one of the better Gen-X sitcoms (funnier than Friends, more “adult” than Seinfeld) is back on TV on Monday nights. I like this show, though not, as one bright spark suggested, because it’s about trains. ‘Cos it isn’t. I like it so much I whinged to the Green Guide about it when almost two years they dragged it off air in the middle of a two part story.

Wish I’d noticed its return last week, but it was only a repeat of that last fateful episode. I was organised enough to catch some of tonight’s episode on-air, the rest on tape, all accompanied by my ironing and laughter.

Tsch – pinching all our good comedies :) Pray you never get all the drivel that passes as sitcoms in the UK.

So that’s how it goes, Coupling is aired to counter those craptacular shows Friends and Seinfeld.

Just gotta keep getting your name in the paper, eh? *L*

Andy, happily there’s a lot of dross on UK telly that never makes it to air here… well, not on free-to-air anyway. Some does though.

Leo, don’t get me wrong. I like Seinfeld a lot. It’s probably on a par with Coupling for me on the guffaw-o-meter.

Ren, I used to write into the GG every so often… have shifted focus, that’s all!

Hey Daniel, I should’ve said that I can’t stand the Seinfeld show. I love his stand-up, but just hated the show and loathe Friends. :)

I’m a big fan of coupling :-) I always describe it to people as “like Friends, but funny”.