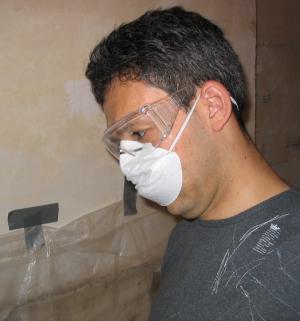 Marita and I spent some time on Sunday attempting to demolish her house. Well, a little bit of it. Sometime in the last century when tastes in building took a turn for the worse, someone ripped out most of the fireplace in her room, bricking it up and replacing what I assume was a lovely old cast-iron fireplace with a blank wooden panel, with the mantelpiece above it. What they were thinking of, I don’t know.

The revamp plan was to take the mantelpiece off, remove the panel, clear out the bricks and whatever else was behind it, and install a cast-iron fireplace once again, even if not to be used for a fire (which would have been a little tricky without risking some smoke inhalation, since the chimney is no longer intact).

Masks and goggles were donned, for protection from dust. A small but fearsome array of tools was prepared, and the immediate area cleared. It felt a little like an archeological dig. “What if we find a dead body behind it?” asked Marita.

Judging from the amount of effort to merely remove the first brick, I may not be cut out for renovating. It felt like a good half hour to get it out (okay so maybe it was only 10 minutes, I don’t know, I wasn’t watching the clock). Whacking it with the hammer and chisel, trying to wedge it out with the crowbar. My goggles fogged up and I could feel sweat under my mask.

Eventually the brick came out, and we discovered that not only was there an entire second row of bricks behind it, but that the brickwork above it which should have remained in place was looking entirely dodgy, and the whole structure was starting to (conceptually at least) resemble a house of cards, as if one were toyingly nudging one of the lower cards.

At that point some rethinking on the whole mini-project was done. It would seem that for now, those bricks are to remain in place.

4 replies on “The bricks”

Eesh… those DIY shows have a lot to be accountable for. Mind your heads!

Very sensible move, backing away from the dodgy-looking brickwork.

It’s only a matter of time before someone does collapse a retaining wall on themselves and then tries to sue a DIY show, of course.

The fireplace held up just fine when there were no bricks there. Stop being such a pansy and get in there with a sledge hammer!