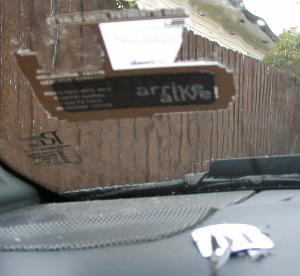 When driving my car, I’m now more informed about the world around me than I’ve ever been. Because my car radio can’t get FM anymore. So I’m on the talk stations… Radio National, 3LO (aka ABC Melbourne) and NewsRadio. Byebye PBS and TripleJ, unfortunately.

NewsRadio in particular has been unexpectedly interesting. It’s probably deadly dull during the week when they’re lumbered with parliamentary broadcasts, but on the weekends (when I do virtually all my driving) they have a good mix of current affairs and news and features from around the world, though possibly a little too much sport for my liking. A weekend or two ago they had a great feature from the BBC about the life of John Peel, and his extraordinary influence on the music world. It was great stuff.

If I wanted music in the car, I suppose I could play a casette. If I had any. If it becomes too annoying, maybe I’ll get it replaced with a super-dooper new CD or MP3-capable unit. But for now I think I have better things to spend my money on.

Speaking of the car, I replaced my rego sticker over the weekend. It had been paid a month ago, but I’d forgotten to stick it in. About a week late — lucky I didn’t get pulled over, as I suspect there’s no way I’d remember if I’d paid it or not.

“Yes officer, uhh, I remember getting the form… but did I pay it? … ummm…”

Now… I know it’s only once a year, but would it kill them to invent a sticker that could be easily peeled off the window, rather than having to go at it for a good half hour with my longest fingernail?

11 replies on “Who listens to the radio?”

with the stickers in nsw you’re lucky if the stupid things stay on all year. mine was half hanging off for the last 6 months despite futile attempts to fix it. then another 2 months while i forgot/couldn’t-be-bothered to put on the new one

A-ha! I have the best trick to get the sticker off. You get a piece of glad wrap, big enough to cover the sticker, wet the glad wrap, and stick it over the sticker. Leave it. After a few hours (in hot weather, less time, in winter, leave it all day) the sticker should come off in one fell swoop!
It’s the water that is the trick. I too, used to hate that one day in the year when I’d have to take that sticker off (not to mention pay for it). Now, it’s sooooo easy! Good luck for next year :)

I’m in the group that has trouble keeping the sticker stuck on … I prefer this group, because it means that each year I’m not breaking a nail trying to remove the sticker. I follow the instructions (clean and dry the windscreen before sticking it on), but the corners always peel away after 6 months or so, and this leads to the scenario of me stretching across from the driver’s seat or me asking passengers to press the sticker back down again, in the vain hope that this time the corner might actually stick to the windscreen … anyway …

Maybe the Qld rego stickers are made of different stuff? They used to be a bugger to get off, but now, you just start peeling one corner and the rest comes away with one flick of the wrist.

Or maybe I just have the nack of putting them on and getting them off… ;o)

Get yourself a razor blade Daniel. An incredibly useful item – “it slices, it dices!”

When the Vic rego stickers were paper-based, it was easy enough to simply wet a piece of kitchen towel over it and let the glue soak off, then you could simply wipe the sticker off. Now with these plastic ones… ARGH. I got into the habit of sticking it all down on the glass bar one corner which I’d carefully fold over onto itself. At least that way I had a hand-hold when I went to pull the bugger off.

I have a special sticker removal thingy that I use and I make sure that I keep this implement in my glove box. It’s sort of like a paint scraper I guess (and maybe that was it’s original use – who can remember) but anyway for the past 7 years or so I have had no problems removing the expired sticker. Also, the trick to stickers staying stuck (oooh all those esses!) is to make sure the window is clean. I would have paid only a couple of dollars for the sticker removal thingy but it’s been worth every cent!

I get to use a putty knife to clean my reg sticker of my license plate every year.

Here’s a trick from my cleaner days.
Lemon juice. Lift a corner up, squirt a bit on, peel, squirt repeat.
Just make sure you wipe it all off, or your new sticker won’t stick.

Daniel’s technique for label removal seems to be below par. It takes me a few seconds to remove the current style of Victorian labels. I use a scalpel, but a craft knife blade (not in a holder) is just as good. I slide it under one corner and peel it up a little bit, then use thumb and forefinger to SLOWLY peel the old label off diagonally.

For those who have trouble with premature droop – clean the area with metho prior to putting the new one on.

The quick and easy way of removing self-adhesive plastic stickers from cars: use a hairdryer. Point a hairdryer (on hot) at the sticker for a couple of minutes. It softens the glue, and you can just pull the sticker straight off. Clean the residue with cleaning benzene (spirits).