I got one of those lifestyle surveys in the mail a while back. Rather than just throw it in the bin, I pondered who would be the most unusable respondent they could possibly get a reply back from? Why it would be Ron and Jeff, the two layabouts I wrote about several years ago.

So I decided they could answer the survey instead of me. Note: this should explain the phone numbers used.

Okay, I may get accused of being an inner-suburbs zone 1 snob because of the suburb I’ve used… it’s all in fun though. Here’s the first section of answers… 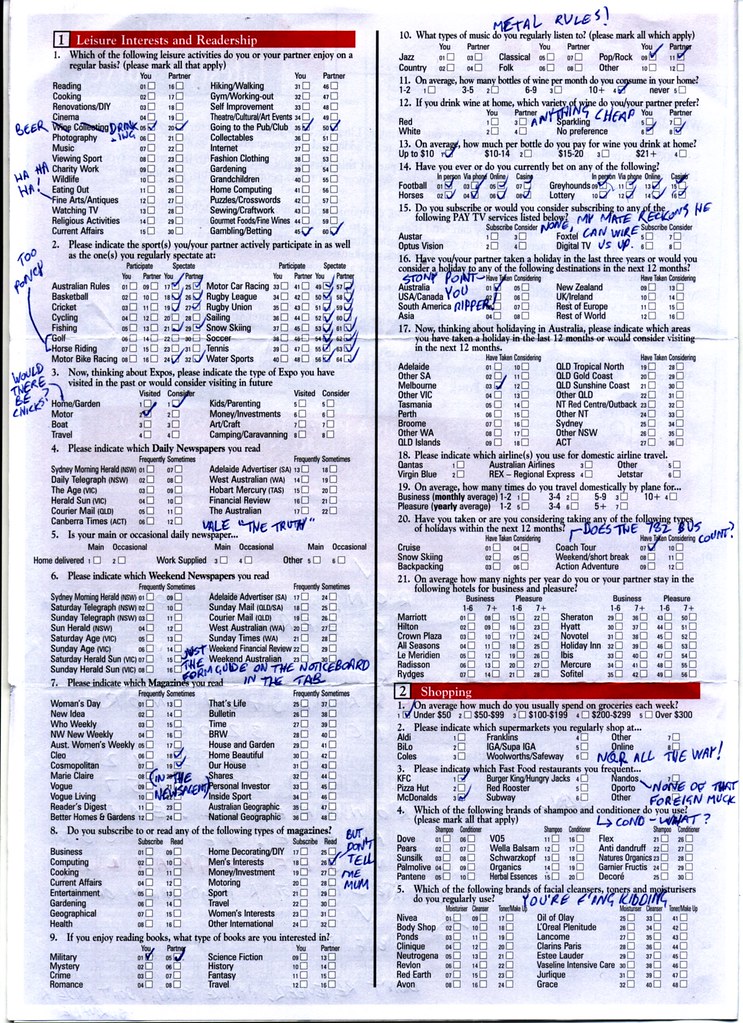 The rest is coming soon… well, if I can be bothered.

Heh! I got one of them a while back.

As to your assertion that R&J’s would have been the most useless, you’d be right only because I binned mine.

If I did fill it in, here’s some of mine:

What car do you drive: None
Where do you buy your furniture: Kerbside
Where did you buy your telly: Kerbside
What are your favourite videos/dvds: n/a
Do you buy music CDs? nup
Where do you go for clothes: Red Cross op shop
How often do you eat at fast food joints: every >3 mths
Do you have fly buys? couldn’t be bothered!
What is your median monthly mobile phone spend? $0 – others call me (I don’t call others from my mobile)
Do you have life insurance? I am my own insurance company!

Nah, I don’t think they’ll get much moolah out of me!

It isn’t a secret that I’m a dag (I did once win $50 in one of *those* puzzle books), but up until now it was a secret that I’ve actually filled in one of these surveys and returned it. I know, I know … It was a momentary case of weakness and something to do in front of the TV during the ad breaks on an otherwise uneventful week-night! I’m bitterly disappointed though, because I didn’t win the $25,000 grand prize for my thoughful box-ticking.

snigger, very good. you wanna watch out the telly stations don’t come after you to write a “reality” tv show :-)