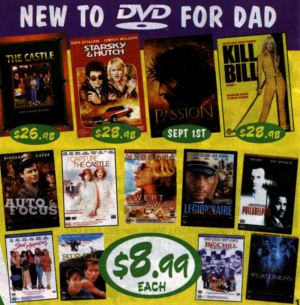 Been very busy these last couple of weeks. At least, that’s the excuse I’ll use for not getting through my To Do list.

Was listening on the radio to some Australian election campaign news, then to some American election campaign news. And it strikes me that we don’t have anything like the big rallies they have over there. And the noticeable difference was that as a result, the Americans get a soundtrack of their politicians making speeches, unchallenged, to the background noise of cheers from supporters. We get our politicians getting a grilling from the media and getting heckled by onlookers. I reckon we give them something closer the lack of respect they deserve.

It’s Fathers Day on Sunday. A few shop catalogues for the occasion have passed through my mailbox. The JB Hifi one was chock-full of good presents for dads, lots of hifi gear, digital cameras, DVDs, all good stuff. Though I noticed they included Steel Magnolias as a DVD special. Even in this day and age, I dunno if too many dads would be overjoyed about receiving that for Fathers Day.

I dunno… as one of my favourites films, I think Tony would love to get Steel magnolias for Dad’s Day. :)

Sadly yes, we (for some unknown reason) idolize these bottom-feeders (left, right, and all over the spectrum) who deserve very little. If I had a child who wanted to be a politician, elecroshock therapy would be the word of the day.

The idea of recieving for father’s day a film that opens with a woman having just shot her husband is hysterically funny!

The campaign reminds me of 1984 when we last had simultaneous elections (not the ones that we thrice-rejected by referendum, but with the USA). Reagan vs Mondale (or was it Dukakis?) and Hawke vs Peacock.

Peter Garret, standing for the NDP, didn’t get in (will he this time?) but in WA, peace campaigner Jo Vallentine (who formerly belonged to the Nats) did and served as NDP rep until that party was infiltrated by SWP, when she became Greens WA (which used to be seperate from the national greens).

Combined with ruptions in the Democrats, and a strong green movement in the (de, or should that be Dee?) forested south, this meant that for years WA had no democrat senators but had 1 or 2 Greens (before the Dems Andrew Murray got in).

But getting back to the present, for some reason the American speeches all remind me of Grover and the Cookie Monster on Sesame St!

I get really annoyed with Mothers Day/Fathers Day catalogues esp dvd and book ones – -most of the stuff they suggest for Mothers Day I hate. I don’t know why they assume mothers are into romantic comedies and fathers are into action movies. Not that I ever get movies for Mothers Day anyway .. was suppposed to get the John Saffran Music Jamboree dvd for Christmas 2 years ago and still haven’t seen it.

The party conventions are big rah-rah events. Other speeches are just speeches and they get plenty of hecklers. Unless Bush is speaking, then he has the FBI arrest all the dodgy-looking people who might cause trouble for him by speaking the truth.