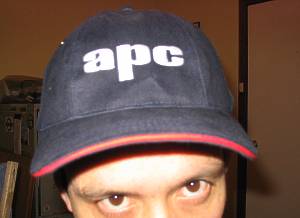 Isn’t this cap hideous? It came free with a geek magazine subscription yesterday. I predict a short life in this house, followed by a swift departure by way of the nearest charity bin.

Geek stuff follows: Years ago a mob called RSACi (Recreational Software Advisory Council… I forget what the “i” was for, but they’ve changed names to ICRA now anyway) got together with Microsoft to design and implement special HTML metatags with which a publisher could flag if web pages had sex, violence, nudity or naughty language in them.

Internet Explorer could be set up so your kids couldn’t look at pages with this content above a particular level. So if I didn’t want the kids looking at a page with “moderate expletives (Expletives; non-sexual anatomical references)”, “killing (Humans or creatures injured or killed. Rewards injuring non-threatening creatures)”, “partial nudity” and “clothed sexual touching” (or worse), it took but a few clicks and a password to do it.

All very well in theory, but there were three problems: the first is it relied on publishers to put in these tags. Though toxiccustard.com isn’t exactly replete with objectionable content, it certainly has its share of swearing, so I put in a bunch of these tags to frighten the kiddies off. But your average pr0n site? They didn’t bother. Neither did anybody else. Only a handful of major sites took the time to tag their pages. So Microsoft’s web site has tags proclaiming that there’s nothing rude within, while sites featuring wobbly fleshy activities of all kinds have no such warnings.

The second problem is that few people know the options exist in web browsers, and even fewer have bothered to set it up. Recently I realised that my kids had been looking at my diary pages from school. I have long tagged my diary with language level 4 (“Explicit or crude language — Extreme hate speech or crude language. Explicit sexual references.”) because I occasionally dip into the lower depths of the English language (4 letter word department). So it’s obvious the school computers haven’t been set up to filter stuff out. And while one could hope that other schools have been more careful to do this, I’m not betting on it… and if almost no web sites have the labels, why would they bother?

And finally, although IE and Netscape (dominant at the time) implemented this feature, since Netscape has vanished, these days it’s only in IE. Firefox and other browsers are gaining market share (I’m switching — are you?), and they don’t have these options.

Then I discovered that at least one acquaintance can’t read my diary from work because of a web filter installed there. It’s not up to me to decide if he should or shouldn’t read my diary at work, and I don’t know how they’ve filtered me out, but it wouldn’t surprise me if their corporate proxy blocks out anything with too high a language level.

That’s just silly. Grown adults can’t read my page, but kiddies can. So the tags are coming off. (Along with all those old useless LinkExchange tags, but that’s another story.)

And as for kids’ web browsing habits, both at school and at home, nothing beats a little adult supervision.

I was going to use Firefox but when I tried it, it wouldn’t display my own site properly. See, I made my site using Dreamweaver and I put frames in it. I seem to remember frames beginning to appear on web sites about 7 years ago when I was at uni.

IE displays the frames page perfectly, but no other browser I’ve tried can do it. I don’t know whether Dreamweaver has written it incorrectly or if frames are only an IE feature and should therefore be abandoned.

Phil, apart from the fact that frames are not only passe, but generally frowned upon because they are dysfunctional (eg if you’re going to use them, there’d better be a very good reason – and having a consistent navigation bar etc is not one of them), frames are widely supported in most browsers, and if it’s only displaying in IE, then it’s a problem with your (Dreamweaver’s) code, not the browser.

Most people want their pages to be viewable by the maximum number of people, so it’s worth fixing, not just for the growing number of Firefox users, but also for Apple, Linux/Unix users, mobile phone/PDA users, and people who don’t literally “view” the web at all due to disabilities, but might have screen-readers or other technology to get at pages.

Quote your URL here, and I’m sure some other friendly viewers will take a look and let you know what the problem is.

OK I’ll fix it and make it simple. I was just trying to make it easier for people to navigate the site and the help files made it look like frames were the answer. It’s an older version of Dreamweaver so maybe that explains it. It was waxing lyrical about the beauty of frames. The address is http://members.optusnet.com.au/~philandelissa
And we’re only novices so no snide remarks about colours, layout, content, code or anything! It’s just there because Optus sell us the space so we may as well use it.

The whole site needs a re-work now because the house is nearly finished but I haven’t the time.

Hey Daniel – you should see if you know of anyone with APC as their initials and pass it on. You can tell them you had it made especially for them and they’ll think it’s a wonderful cap!

Phil, somewhere along the line some of your HTML files have been renamed as .ASP. This should be the case if your pages are generated from code each time (eg including database lookups etc) and are running on a Microsoft web server (this wouldn’t be the case with OptusNet), but otherwise, they should be HTML.

So the quick fix is rename them as .html (and change the references in the FrameSet code to match that), and you should be okay. (There’s probably a way to do this in Dreamweaver, but I don’t know).

Rae, good idea… can’t immediately think of anybody, but if anyone out there knows someone with the initials APC, let me know!

I’m sure schools don’t have sysadmins so I doubt they even know about these tags, and I certainly have never noticed any such options in IE. Well perhaps I have seen them and just thought they will do some silly probability based thing and ignored them.
On top of that if Microsoft had made them negative, i.e. the tag must be set to indicate a particular type of objectionable content is not on the site, then web sites would have been under a bit more pressure to implement them.

I’m glad to hear you’re switching; you won’t look back. Tabs are the killer feature for me, but the relative lack of exploits and automatic pop up blocking (I didn’t even know pop-ups were a problem) also help. And the search box, and the keywords, and the click-to-play Flash extension.

Great idea Rae… the cap has been claimed by someone who has an “APC” acronym to use it for!

I’ve just switched from IE to Firefox – Its like walking accross a desert for six months, then finding cardinia reservoir at three-quarters full. I’ll never go back, I swear.

And thanks for the cap Daniel!