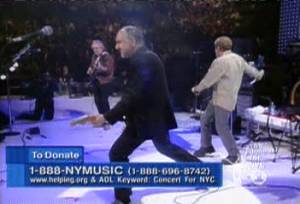 Last night I found myself watching some of the Concert For NYC, in particular The Who’s performance. I’m still not going to splurge out on their forthcoming concert (dubbed rather cruelly by one friend as “Who’s left?”). But this four song performance from 2001 is great music. And remembering it in context, very moving, a gesture across the Atlantic, reaching out to a shattered city.

What I found fascinating is the set ends in the seminal protest song “Won’t Get Fooled Again”. If you’re familiar with the lyrics, you’ll know that many interpret it as a rallying cry against politicians of all sides pulling the wool over the populace’s eyes, justifying painful wars and revolutions for the same reasons as before.

And the world looks just the same
And history ain’t changed
‘Cause the banners, they all flown in the last war

Sitting here in 2004, as what many would claim is an unjust war we should never have got involved in continues to stagger towards an ever-distant conclusion, the lyrics have more relevance today than in a long time.

Let’s just hope that last week’s handover of Iraq to the Iraqis can help bring a lasting peace.

PS. On a more superficial note, how come it’s only blokes who ever like The Who?

7 replies on “Did we get fooled again?”

I like the Who, and I’m not a bloke.
I think it’s only blokes who’ll admit to liking them.
And war is just the president’s way of teaching Americans geography.

I like the who, but I am a new generation Who liker….so maybe way back when (he he) only blokes liked them.

And, to be crude, war is Tony’s way of keeping his tongue close to George’s backside.

I like the Who too and I’m a woman!

Re: the war – I think George Bush did the right thing but for ALL the wrong reasons and none of the right ones. I think he should be held accountable for the lies he told and punished accordingly, but the US did the right thing by removing a vicious dictator from power and freeing a nation. Read http://iraqthemodel.blogspot.com

Yeah Brian, I have no ideological opposition to getting rid of dictatorial tyrants, but that’s not what we were told it was about. And as I said when the war started, if that’s what we’re doing, then who’s next, hey? (And who decides who gets deposed by force?)

You bet we were fooled again. I’m not a knee-jerk contrarian, but that song started to resonate anew in late 2001. It seems that power and people interact in predictable, cyclical ways.