The problems with going to the movies at Chadstone on a Friday night are: 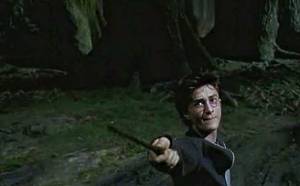 But enough whinging. The venue was by mutual agreement anyway. The purpose of the venture was to meet up with friends and see the third Harry Potter movie, Prisoner of Azbakan. Rated PG, though it almost rated an M before the appeal. I can’t see how it deserved an M. Yes it was a tad darker than the first two, but there was no gore, no blood, no sex, and not even Malfoy saying “fuck you, Potter!” No, it was really not much more adult than the first two.

Plenty of humour. Minimal Quidditch, thank goodness — it was exciting the first time, okay the second. To see it all a third time would have been tedious. The right bits of the plot were plucked out of the book, and made it quite exciting, including the bit at the end (I won’t give it away) which was quite clever. Although some observers have said “oh the Dementors, sucking out souls, how scary!” But I think most kids wouldn’t have a big problem with it.

Just like with the second movie last year, I was trying to remember who the guy playing Mr Weasley was, before remembering later in the film (Petersen, in Red Dwarf). Emma Thompson was very funny, as was Lenny Henry (both of these I didn’t realise until later who they were played by).

All in all, very enjoyable.

I was at Chaddy on Fri night as well (to see Shrek 2 in Cinema 11 @ 7:30 p.m., which was great). I tend to find that if you park in the multi-level near Coles (closest entrance being Warrigal Road) it’s not a long walk and you go straight down into Hoyts from there. You can always find a park in that multi-level.

That’s where I parked. Yes, no problems finding a park, at least on Friday night (on weekend afternoons it’s chocka). But like I say, after the movie finished around midnight, we had to walk back around the outside of the centre.

I got so lost after going to the flicks at Chaddy with my daughter last year that I almost thought I’d hsave to shop at Aussie Disposals the next day so that at least if we had to spend another night in the complex we would be able to do so in a tent and with appropriate bedding, etc. For someone who only goes there every now and then it was extremely confusing and frustrating to say the least.