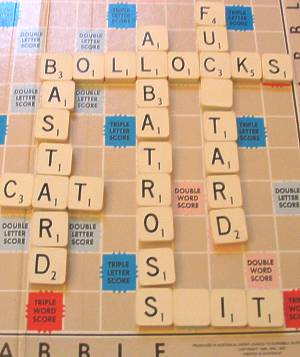 I’ve been playing Scrabble a bit. The word that got me winning the last game was “zebra”, on a triple word score. 48 points, thank you very much… I think I had been trailing before that.

My sister is the demon Scrabble player from hell. Or so her reputation says. I don’t know if I’ve played Scrabble with her since she moved overseas, but I’m looking forward to a game or two when she comes back.

My mum and Peter have been practising for her return. They tell me she beat them hands-down when last they played, so they’re keen to increase their Scrabble skills in preparation for her return.

But they said they found the game a little dull. So they’ve beefed it up a bit. Presto… SuperScrabble. SuperScrabble involves using the letters from two sets (with appropriate removal of some of the more boring letters). And having two letter racks each, with a total of 14 letters. Which my mother tells me has allowed her to easily create longer words.

Presumably the next step would be to expand the board. It depends on where you stop, of course, but taken to its ultimate conclusion, Scrabble could be played on a massive board, and take days to complete.

No the picture is not a real Scrabble game. Just me mucking about. And showing my lack of maturity, really…

now let me get this straight: you play scrabble with your mum and words like fuc*tard appear on the board?

Wow, it’s been so long since I had a good game of Scrabble. And zebra on a triple, how smug were you feeling? Pretty damn smug, I’d wager.

I used to play it, and normally have my dictionary to check if anyone is cheating with some sort of unheard words! It’s cool, and normally creates lots of disagreement.

Please feel free to drop by my weblog and review some of my entries, i’m doing a postgraduate course on Weblog, and being active in the blog community is important. Cheers.

Ahhh – my favourite game. Used to be monopoly, but now that I do some of this in real life, it’s back to scrabble.

Surely you could have found an ‘s’ to put in the lower right hand corner and/or bottom middle to get the triples? And just putting down two Es could have given you ‘caterer’, on a double word score. You could use a double letter twice by laying ‘crap’ across, intersecting with ‘a’ in bastard, also making ‘op’, which can then be made into ‘top’ by adding with C*** on the next move!

Even better than a triple is when you use all your letters and get an extra 50 points.

My mum is the best player I know. It’s not uncommon for her to use all her letters in a game, whereas I’ve only done that 3 or 4 times. She’s also master of using two letter words, though I enjoy creating 3 or 4 words in the one go as well. Some of my favourites (legit as they’re published in scrabble books) are: ai (two-toed sloth), qi (life energy), ex (as in former wife), te (do ra me fa te la so etc), xi (letter), etc

I will gladly challenge you to a game if you want practice!

P, wouldn’t that put an N at the top of the word Bastard? I’m not sure NBastard is a word….

Have you seen the promotional poster for “The Day After Tomorrow” where Flinders St Station is snowbound? I reckon it will become quite a collectors item in a few years (the one of Sydney Opera House being washed away just makes me laugh.)

You’re right Vaughan! So instead, if my letters were bad, I might have to settle for ‘tea’, getting ‘el’ and ‘top’ as well. I have a habit of accumulating too many Is, so I’d really rather ‘topi’, as ‘si’ is a word as well. Assuming someone put -and, -ind or -ond onto the d in ‘bastard’ then c*** could fit there if profanity precedes points in this game.

And isn’t s*it really suit? If the missing letter was an ‘H’ that could help someone with a spare I go out at the end of the game. ‘suit’ has the same possible suffixes as ‘shit’ (e & s) but due to prior bastardry, the latter can’t have a prefix attached.

Even though it was a hypothetical, your game exhibits an almost universal trait of Scrabble – the top left of the board is frequently left unfilled or is filled later than the other quadrants.

heh. I’m enjoying watching this discussion. I whipped up the board in about 5 minutes flat on Friday morning, just before dashing out the door to work.

My former neighbor and I would play Scrabble on a massive board he created that had a 4X squares at the very edge. It would take hours to play and he beat me every time we played. I miss him and the Scrabble games.

If this chap is…