People who wanted their supermarket transaction split-up into separate $30 bills just to take advantage of “spend $30 for 4 cents per litre off petrol” and other such deals would have to queue up again between dockets.

The expression “I’ll let you go”, which is meant to sound like the person is doing you a favour finishing up the conversation but in fact means “get off the damn phone, I’m tired of talking to you now, and have more important things to do” would be banned. A couple of my friends are guilty of using this. 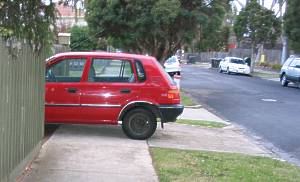 Drivers who consistently fail to use their indicators; needlessly park in driveways blocking the footpath; speed at more than 20kmh above the limit; or deliberately stop at intersections blocking the pedestrian crossing (and may I add often consigning themselves to longer delays because their car is not on the traffic light sensor, so the traffic light may not know it’s there) would in the first instance have a large shiny “MORON” sticker applied to the front and back of their car. In the second instance they would be shipped off to re-education camps where they would face very stern Vicroads testers to try to convince them of why they should get their driver’s license back.

The world’s foremost ant experts would convene at my house one afternoon for a cup of tea and to give me their opinions on why ants are visiting my toilet.

I confess to the first indiscretion!

When walking across the road a neighbour thrust a $20 note into my hand asking that I buy a jar of coffee.

Though to be fair it was quiet and no one was delayed.

*ggl* I am a big one for the “I’ll let you go”, but I’m justified as I keep my friends talking when they really have to go… I have to let them go eventually, Daniel!

I can agree with several of the items on your list. One of the highest up for me would be the parking in driveways and across footpaths. It’s worse when you have a pram and have to try and manoeuvre yourself around these inconsiderates.

I had never thought of doing that for the petrol dockets! But then again I never find the dockets when I get my petrol.

Did anyone see that Today Tonight (or was it A Current Affair – I can’t tell the difference) story a week ago? It featured a woman outraged because she was given a parking fine for parking ‘in her driveway’ (ie, blocking the footpath) and the drivers who wanted a footpath abolished and a line drawn on the road 900mm from the front fences ‘for a fair share between cars and pedestrians’. At least there was a pedestrian advocate on too.

When I come across cars blocking the fottpath I may “accidentally” knock their mirror so it folds in (one newer vars) or knock it out of whack (on older cars) – preferrable onm the passenger side so the moron sits in their car, and then has to get out to adjust it >:-)

“People who drive more than 20 km/h over the speed limit” – WTH? I rarely drive less than 20 MILES per hour over the speed limit, unless I’m downtown or near a school (in which case I find that the limit is too fast anyway). How draconian is the speed enforcement over there?

Charles, if you did that here, you’d quickly find you didn’t have a licence. How many people do they kill on the roads where you are?

I hate the way how cars get in the way when I’m walking along a main road and they’re turning out of side streets. At least right hand turn restrictions can reduce the problem.