Where did these bloody Aga stove things come from? I assume they’re a peculiarly British brand of wanky gourmet stove, because I’ve never seen or heard of them in Australia. Yet they’ve shown up in the last two novels I’ve read, plus had the piss taken out of them in Posh Nosh.

I’m afraid I’m having trouble quite establishing why my life would be better if I had one. Perhaps I’m not in the target demographic. 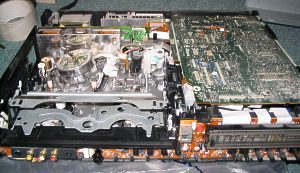 I know where I am with VCRs. In fact I just sent another VCR to Silicon Heaven. It had been good to me over the years, the 10 year old Mitsubishi M59, but a few months ago it got a tape jammed in it. A tape I wanted. A tape with (at least as far as I recall) precious family memories.

And so the debate raged: do I go get the VCR repaired, which could easily cost as much as a replacement VCR, just to get the tape back? Given that I have another, newer, fully working VCR, do I even need a second one? Well while I pondered these questions, I seemed to survive with just one, so I suspect the answer to the second question is No.

On Sunday I finally picked up a screwdriver and started dissecting it. Decided the only thing I wanted to save was the tape inside it, so I wasn’t too delicate with it. Hacked away at the mechanism trying to find the cogwheel to turn to safely eject the tape. (There’s always one somewhere).

Eventually I found it and got the tape out, but not before I noted a loose rubber-band in the works. Which was probably all that was wrong with it. If I hadn’t hacked away so much, it might have been okay to keep using.

PS. Okay I did a little reading on Aga cookers, and given how freaking cold my kitchen is on these autumn/winter nights, yes, I admit my life could be better if I had one. At least, I wouldn’t be so cold. Though equally I could heat up my kitchen by putting the oven on and leaving the door open. And yes, they are distributed in Australia.

Agas are distributed in Australia? Wow. I guess we do have some climates cold enough to warrant them … not that I’ve seen one over here as yet!

There is actually a “Aga” shop in Malvern Road, Prahran …. not that I’ve ever seen it open during business hours.

whoops … now that I’ve read to the bottom and seen your link to the shop I feel really silly. And make that “an” aga shop. Tsk, tsk – bad editor.

We had the true aussie version in our farm house, an Everhot. Great big beast, also heated our hot water – if you got too carried away you could get almost straight steam coming out of the shower head, turning the bathroom into a huge expresso machine.

My aunt’s got an old one in her farmhouse – looks like one of those Aga things, but probably isn’t. It’s fun to cook with.

I walk past the AGA shop in Pahran every couple of weeks and it has always been open. I’ve even stopped to gawk at the window when I’ve had the time.

Just one word to say on Aga. Read Slyvia Plath Letters and Love in a Cold Climate and Harold Nicholson diaries, (Vita Sackville West’s husband), Beverly Nichols, and some film maker who died not long ago who’s name I cannot remember. Many references to the Aga. Hmm, I have never seen the Aga shop in Prahran?

Derek Jarman was who I was trying to recall. He had an Aga.

So the question has to be asked… did Sylvia Plath use an Aga to kill herself? (If so I can understand why they don’t use that in the advertising)

Given it was solid fuel fired, it is most unlikely that she killed herself with the Aga. Although if it fell on her it might have done the trick. I really can’t remember how she killed herself. Btw, Aga’s can have a water jacket as well and heat your hot water and/or provide hot water for tea or coffee. But then so can the Australian IXL stove.

Your mention of AGA STOVES prompted me to search with Google on
“aga stove” The results were:
“Results 1 – 10 of about 12,300 for Aga stove. (0.30 seconds)”
with all kinds of information and things for sale.

I watch Britcoms on TV whenever I find a good one and have seen the term many times,

Enjoy your news items and your diary – Keep it up if you can!!

Aga cookstoves remind me of the wood burning stoves of the turn of the century (1900) on the farm in Canada!! And it’s made of the same metal – Cast iron! I’ve never seen them before (I checked Google as well!) It looks like the multiple ovens are quite small. How do you fit a 30 lb turkey in one?? (No that isn’t too large if you have lots of people to feed on a holiday.)

Oh yes, there are Agas in Australia, mostly in the colder rural parts. The smaller, wood-burning Rayburns are more common, though even they are not as common as Everhot slow combustion cooking stoves.

Agas can even be spotted in the wilds of Queensland — see http://www.marquis-kyle.com.au/gracemere09.htm

Aga is the Rolls Royce of the wood burning stove. Would love one in a mud brick in Castlemaine but only have a reconditioned Everhot that is badly in need of spare parts! Does anyone know where I could get these?

Information about AGA Stoves.Traditional AGA stoves were designed to burn Anthracite Coal,”Smokeless Fuel” the stove has a large cast iron barrel above the ash pit and when fully charged will burn unattended,twelve hours and more.In Austalia most of these stoves have been converted,in the sixty’s & seventy’s to Heating oil and when oil got too expensive then to natural & LPG gas.The operation of the traditional AGA is Combustion and there fore the stove has to maintain an average temprature 24 hours a day,the radiant heat produced from the free standing unit is appr 3 kw “Not very much”.AGA now produce a Gas electric cooking stove that is more along the lines of conventional gas & electric set up,which most people accept and comprehend.PS with the modern style AGA a 5 star energy rating is possible. Regards woodfirestove Kel