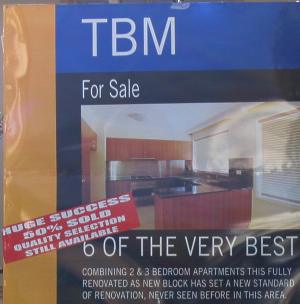 (To recap: Last year the flat I was renting was sold to developers. They kicked everybody out; debated about how much notice they’d given; their builders made a nuisance of themselves; my eventual move went well (Nando’s aside); the flats were renovated and put on market again).

Noted with some amusement the other day that the now-renovated flats are still for sale. A new sign proclaims something along the lines of “Huge success! 50% sold!” Oh great. That’s 3 out of 6 sold. Doesn’t sound that impressive when you put it that way, does it. It’s coming up on a year since the developers bought the block, so given how awkward their builders sometimes made it while living there, it’s somewhat satisfying to know they still have a whole buncha capital stuck in it.

Hehe. Not bitter at all? LOL

I think the appropriate sentiment is ‘schadenfreude’: deriving pleasure from others’ misfortune/lack of success!