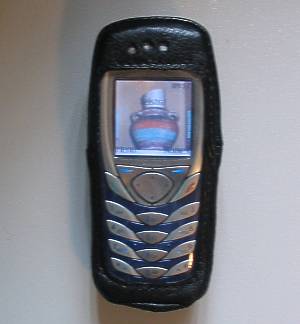 I just got my (replacement) new phone: the Nokia 6100. I think I got a reasonable deal on it, though I was a little miffed that the rather spiffy-looking 7250i went on special just after I ordered it. For a little more I could have had a radio and camera in the phone. Not exactly essential for making telephone calls, but nice-to-haves.

No matter, the 6100 is here in my hot little hands now, and looks very nice. Being a long-time Nokia user, the navigation is familiar… I’m already noticing how I don’t have to battle with it to answer calls or send SMSs or tell the time, like that Motorola thing I tried a few weeks ago. It’s also considerably smaller and lighter than most phones, my old 6210 included. Definitely a plus — it sits on my belt in its new leather case as light as can be. Well, as light as 78 grams can be. (Yes, leather case. My paranoia levels up again after dropping the 6210 onto the ashphalt during a spontaneous and wildly inaccurate shot at a netball goal yesterday morning.)

Interesting to note that the cable to hook it up to a PC costs a totally exhorbitant $130 or so — in fact a funky cordless infrared unit to connect it up is around half that price. So that’s what I got. And perhaps the discount gods are smiling upon me again, as I got it for $20 cheaper than expected.

So now I can try out the funky software that came with the phone, for synchronising address and appointments, putting my own pictures on the phone (time to re-instate my “Don’t panic!” wallpaper), all that kind of thing. Oh, and installing Java games for free. Most important. If I’m really having an attack of the geeks, I could even try writing a few Java applets for it.

The one thing I won’t be doing is getting a favourite song as a polyphonic ring tone. I’ve had a listen to a few, and almost without exception, they are hideous elevator music monstrosities.

Postscript. It took almost no time at all to get the infrared link working. So I can copy pictures and Java applets onto the phone. And it all works with both the new 6100 and the old 6210, which made it simple to copy all my names and address across. Bravo Nokia.

4 replies on “The new phone”

god yes. don’t some of those ring tones make you just want to grab someone’s phone and smash it to little pieces? (or maybe that’s just me)

It’s not just you.

Hey, that’s not a picture of the renowned Anthony Malloy Football Tipping Competition perpetual trophy on your phone is it?

where can i find java applets that i can put on my phone (for free)? u got any ideas?