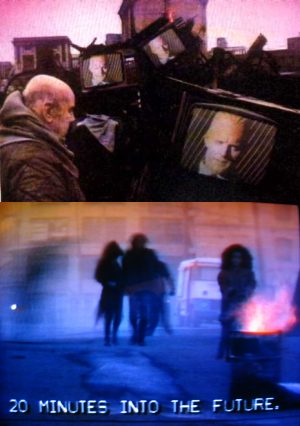 In the late 80s and early 90s, I watched a lot of TV. I also recorded a lot of TV. It’s left me with a rather large collection of VHS tapes, probably in the region of 250. As the 90s changed from “early” to “mid” it finally dawned on me (Eureka!) that I wasn’t getting around to watching very many of these tapes. And I stopped. Somehow, my life seems none the poorer for it.

But every so often I’ll dig through the collection and find something I’m glad I taped. I’m reading Neal Stephenson’s “The Diamond Age” at the moment, and it’s got me rather interested in the whole futuristic cyberpunk genre of science-fiction.

Sci-fi seems to go off in two major directions. One explores the world of aliens and space exploration: Doctor Who, Star Trek, Ender’s Game, Star Wars. The other explores what happens to society (primarily western) as technology develops, private companies and government jostle for power, some people get richer, many seem to get poorer: Blade Runner, Robocop (which I hated, but that’s another story), even Futurama and Blakes 7, to a certain extent. (Yes of course there’s some overlap.)

Max Headroom was in the latter camp, and was something I taped in those late-80s recording frenzies. For those unfamiliar with the concept, the title character is a computer-generated VJ, based a human TV reporter. The show came in a number of varieties:

Variant 1 was a British telemovie, a dark tale of a future world where big corporations reign supreme, on the lawless streets food is scarce but TVs are everywhere, and body banks are doing big business (often without the donors’ permission). Every so often it pops up on TV again — most recently mid-last year on Channel 9, but alas I was out that night, and forgot to set a tape for it. It’s still hailed as a great piece of film-making, with one (perhaps a tad overenthusiastic) reviewer at IMDB saying: this movie is nothing short of being among the most impressive and visionary movies ever made, and by far one of the most interesting (and underrated) cyberpunk tales told.

Variant 2 was a music video show hosted by the electronically produced character from the telemovie — in fact I believe the video show was conceived first, and the telemovie spawned from it to explain the character. Whatever. It aired on the ABC for a while, but if you ask me was pretty forgettable otherwise. It also spawned some cola ads, as I recall. Don’t remember if they were for Coke or Pepsi, so maybe they didn’t work too well.

Variant 3 was an American adaption of the British telemovie. Not quite as dark, it suffered from comparisons to its parent, but the main points of the story and major cast players are the same, and it was this that I recorded a few episodes of all those years ago. As I said, reading “The Diamond Age” re-sparked my interest in the genre, so I dug out the tape on Sunday night to re-watch the first episode, which is based on half of the plot of the telemovie. A perfect accompaniment to the ironing.

Ratings leader Network 23 have invented Blipverts, a 30 second advert condensed into 3 seconds, to prevent people changing channels. Problem is in some cases it causes synapse overload, and some viewers are exploding. When a Network 23 reporter stumbles across this, his story is surpressed and network heavies go after him, at one stage leaving him for dead and selling him to a body bank.

I think it’s aged very well, and considering what it was — a sci-fi programme made by a mainstream American production company (Lorimar) — is a very dark, subversive piece of work. Looking forward to watching some more. Better do some more ironing.

6 replies on “20 minutes into the future”

There was also a, believe it or not, talk show with Max as host. I think it was American and from around the time he was spruking Coke.

The IMDB review may be overly effusive, but Max Headroom was certainly a very much underrated telemovie.

yep, it was coke. “it’s the red that refreshes!”

I keep flirting with Cyberpunk. I’m re-reading “Perdido St Station” at present, from the sub-sub-genre of steampunk: like Dickens writing science fiction.

You left out some like “The Girl From Tomorrow” (Australian) and more importantly “Sequest”!

Max headroom was rerun on the cable channel Tech TV last year. I did happen to record all of them..and like you will probably never watch them again..since i have too much of the new stuff that’s on! sigh!