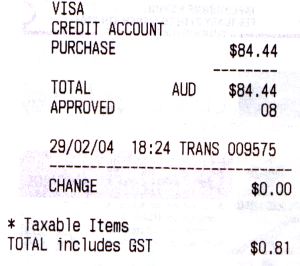 Sunday is Big Grocery Shop day for me. I’ll usually wander down to the local fruit market-ette (it claims to be a fruit market, but really it’s just a quadruple-sized greengrocer) with the kids (detour to park on the way) and a cloth bag and pick up the fruit and veg for the week, lugging it (and maybe a loaf of bread) back home in the sunshine. Well, provided there is sunshine. Nice way to spend a Sunday.

Then later on Sunday afternoon I’ll take the car to Safeway and stock up on everything else. I must have been short of a few expensive items today, because the list was written on a small scrap of paper, but it ended up being some $84.44. And it fitted into just three cloth bags. Mind you, I nearly broke my arms carrying them from the trolley return thingy back into the car.

Anyway it was with some satisfaction that I looked at the receipt and noted that there was only GST on 3 of the items. Two of them were chocolate, so that’s probably fair enough*. The other one was laundry liquid. GST, of course, was meant not to be charged on basic living items. I know the feminists were (quite rightly I reckon) a tad hot under the collar that feminine hygeine products weren’t GST-free. Did they ever reverse that decision? Well laundry liquid isn’t GST-free either. Apparently clean clothes are a luxury, not a basic living requirement. Must remember that when I next notice the whiff of a tramp walking upwind. S/he’s just avoiding GST.

Oh well, they’ll probably make more than enough to compensate from the next few restaurant meals I have.

*Wait a sec — are they trying to claim that chocolate is not a basic living requirement?!

6 replies on “Take that, Mr Taxman”

Ii never thought to look, but I have now. $92 bill and eight cents gst. But it was nearly all fresh food and no Vim or product, maybe not quite typical. Made up for it today with lunch and afternoon tea at Williamstown.

I blew Â£40 on groceries at Tesco on Sunday and nearly had caniptions. Still, I did buy a long-sleeve T and some wine while I was in there, so I can’t claim I was entirely restrained.

Any time a certain flatmate offers to take us on a shopping run in the car I can’t resist the urge to stock up on large, heavy things.

why don’t you put the groceries into the car *before* you return the trolley?

Good question! ‘Cos in this case the car was parked on the street, some distance from the supermarket carpark and trolley return.

And because I didn’t guess correctly how damn heavy the bags were!

Little Johny Howard apparently thought that shaving his face was more of a ‘basic living requirement’ and so made razors exempt.