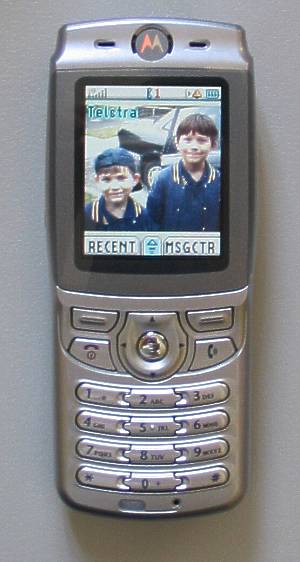 I bought a new mobile phone. If “bought” is the correct term — I paid no money up front, and the monthly fee I’m shelling out has actually dropped by ten dollars. Unlike the cinema last week, the phone company were happy to give me a discount for ordering direct from them over the web.

It arrived by courier yesterday, and in spare moments at work I tried to get it working. Eventually determining that my ancient SIM card wouldn’t work in it, I went to the phone company shop and they gave me a new one.

Voila! The phone lives! It takes photos. Lovely photos. (Well, depending on what you point the phone at, I suppose.) It has a funky full colour screen. It has a bunch of games in it. It sends multimedia messages. And it has those annoying polyphonic tones – for when you turn it on, turn it off, press a button, when someone rings you up or sends you an SMS… you get the idea. As soon as I figured out how, I switched them all off.

I know some people love their polyphonic ringtones. I don’t. I gather they’re all based around MIDI, a standard for playing music instruments. Theoretically MIDI songs can sound cool if played in full blown multi-thousand-dollar synthesisers. In almost any other environment, including on most computers, they sound like crap. This is why I have my web browser configured not to play the bloody things. The bestest piece of music can sound like crap when rendered as MIDI. Your favourite rock anthem in MIDI is not cool, it’s a travesty. It’s not much better than elevator music or supermarket muzak. And while phones are improving in their rendering of music, for the most part I think that (a) they don’t quite get there, and (b) even if they manage a perfect rendition, I don’t want my pocket trumpeting my favourite rock anthem when somebody rings me up.

Anyway, the phone is good. Is fun. New toy good. The catch? Well apart from wrestling with a whole new set of controls (including the “start call” and “hang up” buttons being on opposite sides), there is the issue of the huge collection of phone numbers in the old phone’s memory. Probably over a hundred, most of which are at least moderately useful. Ah, no problem — just slip the new SIM into the old phone, copy them over, right? Uh uh. The old phone wants a password when you change the SIM. A password from long ago, now lost in the mists of time. It’s probably just four little digits, and when I set it, it probably seemed like the perfect password, that nobody would guess but that I would remember. Now, three years later, I have no idea what the hell it is.

I adore those ringtones.

It sounds so professional when talking to a client and they can hear a [insert animal] making [insert animal noise] sounds in the background.

If I hear the Mexican Hat Dance one more time today, I will strangle someone.

I have a friend whose telephone is also a PDA. The warning sound for an impending appointment is a woman’s voice:

The first time it was funny……

Look out for the person on the train with a new mobile and watch as they sail past their station because they are learning it’s features. Do not criminally offend by trying out the inbuilt ring tones. My partner has a polyphonic phone and I think it is rather nice. It’s start up is soothing and welcoming, something like windows 98 start up. It’s sms alert makes you aware without being demanding. You hear the phone ring, but it is gentle.
I hate my demanding phone rings/tones. Lucky it rarely happens.

actually older models of phones are built on midi technology. The poly phones try to bring mulitple brands of cound playing at the same time to give a more accurate sounds. If you want real mp3’s as your ringtone you can always go for the nokia 3300, but it’s not a camera phone but you could always buy the attatchment. Also for that password you can try these industry standards: 1234, last 4 digits of your telephone number, or 0000

Got the phone numbers sorted. For the record, to get the phone security code for a Nokia phone, get hold of a data cable and a copy of Logo Manager (version 1.21 does the trick, probably others too – search on Google). Run it and go to the option that gives you the phone information, and it displays the code. Secure? No. Sanity-saving for me? Certainly. It was one of my usual codes, but with a cunning fifth digit added – why did I do that? Why?

Anyway I put the new SIM in, copied the numbers across, and whoopee, hours of typing on a cramped keyboard is saved.

As for the phone/message alert tones, I’ve got them set to some relatively less-annoying sounds than the defaults. As time goes on I’ll tweak them to be soothing, not demanding, and not annoying to my colleagues.

Motorola phones are bad news; my Wifely Person has had two different models, and both have had to go back several times (one was replaced) because of constant problems. None of the problems ever went away.

I got a Sony Ericsson T610 and it’s fantastic; it has the “increasing volume” ringtone, your choice of monophonic or polyphonic ringtones, it uses MIDI (but the sound sample set isn’t really terrible). The camera is good, and the built-in infra-red is a lifesaver too (use it to back up SIM card and phone memory contents to my Wifely Person’s laptop PC, plus copying MIDI files to the phone and photos from the phone).

The menus in the T610 are graphical, clearly laid-out, and is operated using a little joystick thing (which you can also use to play the games with; it supports Java and Mophun games).

And it’s small, and light, and the screen’s good. And it looks good too.

Re: Motorola E365: How do you disable those annoying polyphonic tones – for when you turn it on, turn it off?

Re: Motorola E365: How do you disable those annoying polyphonic tones – for when you turn it on, turn it off?

Quick reviews: TV/film/phone
This new phone is getting irritating. Possibly it’s mostly that I’m so used to the Nokia-style user interface on phones, but there’s also stuff I simply can’t seem to do on this phone…