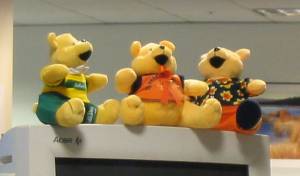 Everyone who has a speakerphone apparently understands not to use them in an open office. People who need to talk hands-free all have headsets.

Some of the womenfolk have fluffy toys on top of their monitors.

One bloke came in on Monday and accused one of the new people of stealing his chair. “Not so!” they said, it came from one of the meeting rooms. He claimed it back, and was then seen Liquid Papering his name to the back of it.

I haven’t seen anybody feed the fish yet, though someone must. Knowing my record of fishicide, I’m not going near them.

It’s as well to beware in the toilet. At least one of them flushes with such ferocity that you’re likely to get water splashed on your shoes if you don’t stand back.

The hot water boiler in the kitchen makes gurgling noises after using it.

One woman has a tiny tiny office which is almost smaller than my allotted space between the partitions. And no window. She must get claustrophobic if she ever has to close the door.

In my group of four desks are two spares, me and a mysterious stranger who hasn’t shown up for the last three days, and so I am yet to meet.

5 replies on “Observations from the new office”

Please start calling chair-boy Gareth, you might want to check his reaction to jelly too.

bahahaha…! I wonder if he’s in the army reserves.

I saw on tv tonight some pythons can live for two year without a meal. I think fish can survive pretty well without food for quite some time too.

I think I might sneak around and take photos of my colleagues’ monitors. Though I must boast mine is the best in this office place. Perched atop my TEAC CMV1760 hand-me-down I’ve got a WWII diaorama (vaguely work-related) happening: Winston Churchill in ‘V’ pose, General Douglas MacArthur … oh, that’s where the WWII diaorama ends. Then there’s a plastic red crab, a stickerbooth photo with a shark about to eat my head and a figurine of Beavis of Beavis and Butthead fame. If you push a button he says “Are you threatening me?”