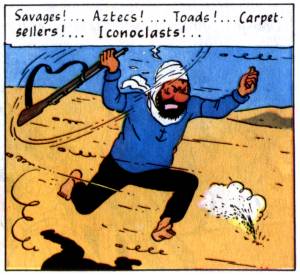 Tintin turned 75 on Saturday, and he still doesn’t look a day over 16. The Belgians, ever eager to remind the world where he’s from, have issued a special 10 euro coin to help celebrate.

Upon reading about this in the paper over the weekend, memories of the books came flooding back, and a flick through some of them showed they are just as entertaining as they were in my childhood. Captain Haddock’s expletives brought a particular smile. Crab with the Golden Claws provides the earliest examples, Haddock calling the villains various names including heretic, slave-trader, technocrat, hydrocarbon, gyroscope and the possibly not-considered-for-its-political-correctness-at-the-time Aborigine.

Harry Thompson(with a p)’s book Tintin – Hergé and his creation is an excellent read for any Tintin fan – a critical look at the creation, with detail on the design, writing and inspiration of Hergé’s comics, including the background events of the time. One, the German occupation of Belgium, led to later criticism that Hergé had collaborated with the Germans, but Thompson’s conclusion is that far from it – Hergé directly parodied them in The Black Island and King Ottokar’s Sceptre, with the dastardly Müsstler having a name that is the combination of Hitler and Mussolini, and the fascist regime Borduria representing Germany.

Pages 100-102 of Thompson’s book go into some detail about how and why Haddock’s impressive vocabulary came into being, Thompson writing that for the most part it consists of variations on the themes of piracy, dark age barbarianism, and the early stages of man’s development, and he goes on to reveal some of their meanings, including those of Bashi-bazouk, cyclotron, pyrographer, Moujik and poltroon.

Thompson writes: Hergé combed dictionaries and reference works for suitable words, which had to be threatening-sounding but innocuous. Only once did he make a mistake, when he used the word “clysopump”, a rather graphic medical term to do with the bowel. One of Hergé’s team then forged a joke letter from an outraged parent, claiming his offspring had been scarred for life.

Tintin books are still around of course, and the recently-made TV series is shown on the ABC at the moment. No, it’s not ideal — as everyone knows, the voices are wrong, of course — but thank goodness the style of the animation at least matches the books. Haddock’s whisky-drinking and pipe smoking have vanished so as not to give the kiddies any bad ideas, though the tragic way his alcoholism was portrayed in the books might very well have helped keep me well clear of alcohol until well into my 20s.

Asterix, too, is in the news, with a new Asterix book recently published (despite half of the creative team having been dead for a quarter of a century) featuring rare and previously unpublished-in-English comics.

When I was growing up, I leant towards Tintin, probably because I didn’t understand most of the puns in Asterix – and puns are a key part of it. But they’re both great creations. I’ll be looking out for the Asterix book, and I may just dig my Tintin books out of the cupboard again.

Regarding political incorrectness, Tintin in the Congo was a real eye-opener.

My favourite is Crab with the Golden Claw (IIRC).

Fuck I love Tintin. Tintin comics were the only comics I was allowed to read as a young tacker, hence a lifelong obsession was born. Belgium has brought out a special 25 euros coin commemorating the anniversary … I WANT IT BAD.

‘Tintin: The Complete Companion’ by Michael Farr is an excellent book, esp. the photos of the artifacts, planes, places etc that Herge used in the stories… e.g. I think the ‘broken ear’ idol is in a museum in Bruxelles… and according to tintin.com, the Ethnographic Museum in Leiden has an exhibition of some of the pieces Herge drew…

I got referred here my a guy called Mike Lovelady in England who writes a journal and says yours is the bees knees, well I agree. I’m writing my own (just started, see my website if interested) which is rubbish but hopefully with experience I will get better.

Happy birthday Tintin, you were always my favourite over Asterix!

Bravo Tintin! You still the ONE.