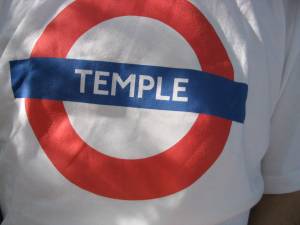 Driving along yesterday by a park, I spotted a row of people with their dogs all SIT!ting next to them. Probably an obedience class or something.

Suddenly I heard a bark – one black and white dog had broken from the pack and was sprinting along. I was doing the speed limit or so – 50kmh – and so was the dog, parallel to the car. When I reached the end of the park and the gap in the fence, the dog slowed down a bit. I kept driving and looked back, no sign of it – it had probably gone back to its master for a telling off.

Today I’m wearing the London Underground Temple t-shirt my sister got me for Christmas, which for almost two weeks has had me humming to the tune of Tim Ferguson’s ranting on track 9 of “DAAS Icon”.

Last night watched the Remaking Of Pelham 123. Not as good as the original, I thought, but these things rarely are. I was trying to work out where I had seen the actress playing the woman in the command centre thingy before. Finally figured it out, 12 hours later on the train this morning: the psychiatrist from The Sopranos.

After having just seen the original, I wanted to see the remake – to compare. Watched some of it last ngiht and taped the end. The remake is not a patch on the original. Then again, they never are, are they?

i think you’re right about remakes, but i quite enjoyed the remake of the time machine. i thought they did a rather good job in keeping with the original, yet making it a little more modern.

Ah…”The Taking of the Pelham One Two Three” – school holidays in 1974, I do believe. Went to see it without any knowledge of the film, following a friend. Travelled into the city to see it from the estern suburbs of Melbourne in the days when a trip to Melbourne from as far out as I lived meant HAVING to see a film (there were no other cinemas around me in those days!). Great film – I was enamoured, and still think it holds up today.

It was also when I realised that one must not see film trailers if one wants to truly enjoy a film. Ever since then I’ll studiously avoid previews so that I can go and see a film without thinking “We’re halfway through the movie, and I haven’t seen that scene I saw in the trailer where he…so he can’t die…yet!”

No spoilers for this one…