Ford and Trillian let off steam. Yeah the pictures are a bit naff. That’s ‘cos they come from some obscure BBC archive video, and ‘cos time and energy are lacking so I snapped them off the TV rather than wrestle with the DVD screen capture software. 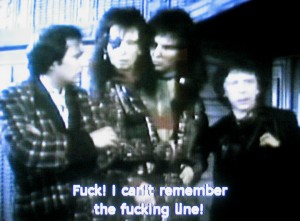 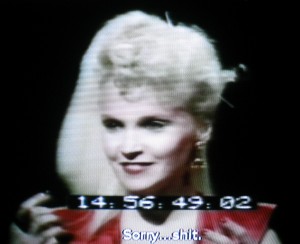 The whole world of swear words is just one of many ongoing challenges for parents. I value free speech and artistic impression (and in particular the right for people to use whatever words they want to express themselves). I swear. Not a lot, but I do. Generally I save it for special occasions – to make an impact in what I’m saying, to add emphasis to my expression of anger or disappointment, or for humour. And only to an appropriate audience. What I don’t do is litter my speech with four letter words, like some people fucking do.

But I cringe at the idea of my kids picking these words up and using them inappropriately. Thankfully as they grow older and more mature, they are starting to appreciate that some words they hear in the school yard should not be used in company, and if used at all, should be used sparingly.

The boys’ education in the world of fine arts continued over the past week, with them seeing a classic: Hitch Hikers Guide to the Galaxy. They’ve now watched the

DVD of the TV series, and although a lot of it went straight over their heads, they loved it. The various robots, spaceships and that cool frood with the two heads is enough to keep any kids interested. I know that when I was first exposed to it when aged 10 or 11, I didn’t get much of it, but have appreciated more and more as time has gone on.

The DVD is rated G. Which is most appropriate. Until you put in the extras disc. One feature on it, a collection of out-takes, is littered with swearing, so I decided not to let the kids watch it. What I’d forgotten was that a fascinating hour-long "Making of" on the disc also includes bits of the out-takes.

So this morning, while the kids and I munched on breakfast, we watched the Making Of. With the subtitles turned on – something fairly common in our house because it helps the kids with their reading practice. And suddenly I noticed David Dixon (Ford) and Sandra Dickinson (Trillian), on-screen saying "Fuck! I can’t remember the fucking line!" and "Sorry… shit", accompanied of course by the word-for-word subtitles.

Shit indeed. But to my surprise, the kids didn’t bat an eyelid. Perhaps:

Well, I did say something. I stammered something about this programme including swear words, and that I hoped they wouldn’t be repeating them ad nauseum and/or in inappropriate situations. Like, on the phone to their grandmother or something.

The kids seemed more interested in the spaceships and monsters and explanations of how the computer-looking graphics weren’t actually computer graphics, anyway. So rather than draw any more attention to the issue, I left it at that, turned off the subtitles and left the DVD running.

The Making Of concluded, and the credits rolled. With the credits were more out-takes, and suddenly a litany of fucks and shits from Ford and Zaphod emanated from the TV. Okay, too much. It was almost time to go to school anyway, so I shut it off and away we went.

So what happened at the OFLC? I don’t know. Searching their database, it shows that the video releases of the TV show got a G rating, but the Making Of got an M rating. I can only assume that they gave the DVD release a rating based on the videos of the TV show, and didn’t actually look at the content of the extras disc.

I’m not so concerned about this particular case. It’s only language. The boys are at a stage where they probably know most of the swear words available to speakers of English, and seem to know not to repeat them inappropriately. Were it sex scenes or violence that had slipped into G rating, however, it would be a worry.