I had one of my all time great weekends. So good I was smiling to myself, and practically dancing into work on Monday morning. That’s a worrying prospect, isn’t it, being that happy on a Monday morning.

On Thursday night the boss shouted us to wine and pizza, saving me bothering to do any cooking. On Friday night I was out for drinks and dinner and a lot of laughs. Saturday was the big VCR killing day with Josh and Cathy, which was probably the most fun I’ve ever had in a public park. Then out Saturday night with them and some of their friends, who seemed bewildered and startled to hear that we’d spent the afternoon destroying consumer electronics.

Thanks to a VCR that works properly, I got to watch Saturday night’s viewing, including the repeat of a show I wanted to see in full ever since I happened to see a mere snippet of it a few years ago: Ultraviolet. Mucked around with the kids on Sunday, and by the time the evening rolled around, I realised I hadn’t had to cook (or wash up) since Wednesday!

Then on Monday morning, I managed to do my good deed for the week, by offering a seat on the train to a woman who, it turned out, didn’t feel very well. Train seat karma then kicked in, as at the next station, the seat next to her was vacated, and nobody else wanted it, so I got to sit down.

And now of course, tonight is Census
night. 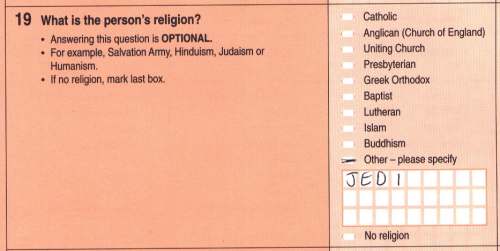 I thought for a while about this, and decided to go with it, especially since it turns out the Jedi Creed is closer to my own beliefs than any other organised religion that I know of.