Welcome to the year two thousand. The very fact that you’re reading these words probably means that the dreaded Y2K bug didn’t eventuate. At least, not in a huge way. I’m sure the residents of Hobart and Adelaide aren’t too disappointed that their bus ticket machines stopped working for a while.

(Oh, commiserations if you’re in Ghana though.)

For New Year’s Eve, we had planned to all go into the city with the kids, but changed our minds – just as well given how sardine-like both the trains and the city were. L decided she wanted to stay home with the kids (they were asleep anyway), so it was just me. 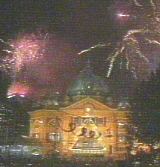 When I got to our local station, it was like morning peak hour, but at night – there were tons of people on and around the station, and when a train arrived, it was already packed. I squeezed aboard and spent the 20 minute journey amongst a couple of hundred revellers, who for some reason started singing "Good old Collingwood forever", and other New Year’s Eve favourites.

I came out of Flinders Street Station and it took me about 20 minutes to move a couple of hundred metres along Swanston Street to the intersection of Flinders Street, where I found a vantage point. I had planned to go towards the river, but the way the crowd was surging the other way, didn’t have much choice.

I found a spot with a reasonable view of where I expected the fireworks to be. The crowd watched the countdown clock on the Arts Centre spire, and the bells of St Paul’s Cathedral started up. On the stroke of midnight, the lights didn’t all go out – on the contrary, the sky lit up from about half a dozen different places – there were fireworks everywhere for about 10 minutes. Then they quietened down, and just as people thought they’d finished, there was another enormous burst, as the crowd cheered, clapped and said "Oooh!" and "Ahhhhh" when the really spectacular fireworks went off.

Afterwards, some people continued milling around, others including myself crowded back into the station. The train wasn’t quite as crowded, though the police were doing crowd control Japanese railways style to keep the trains moving without too much delay.

As they’d said would happen, the train stopped for a few minutes at Caulfield at 1am, midnight standard time, a Y2K precaution. Enough time to get some entertainment with a couple of teenage girls arguing with some policemen on the platform. The power didn’t go off, so the train continued on, and I headed home, to watch it all again on the video. Of course, the fireworks looked a bit pathetic on TV after seeing them in person.

L and I stayed up a bit longer, talking and watching other stuff on the 2000 Today broadcast. We were just getting ready for bed at 2:15am, laughing and joking about the Y2K bug and its (non) impact when the lights went out. I think the street lights went out too – it was pitch black. L burst into hysterical laughter. I was thinking that (a) we could be in deep trouble and that (b) I’d have to eat my words. "Oh shit." I said.

Five seconds later, everything came back on. Probably just somebody at the electricity company having their little joke…