Well, it was a sometimes cloudy, sometimes sunny Christmas. We woke early, let the kids unwrap their presents, throw paper around and generally make a big mess of the livingroom, which is definitely a Christmas tradition.

And we indulged in the Christmas tradition of pulling Christmas crackers, having them fall apart rather than fire off properly, and then groaning at the utterly terrible jokes which are always inside them, and trying in vain to put on the paper hats that are also always inside, and which by tradition are 10% too small for you, except if you’re a little kid, in which case they’re about three times too large.

After we got back nobody felt like eating dinner, and the kids were in bed pretty quickly after wearing themselves out running around the garden all day. 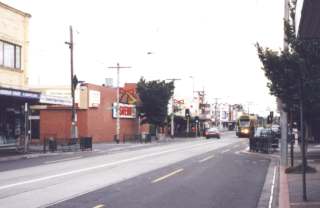 Christmas Day, 8pm – All quiet on the streets of Glen Huntly

I went for a short walk down the street to mail a letter and stretch my legs. It was only about 8pm and still light, but there was virtually nobody around.

We rang my sister later in the evening – she and her boyfriend are spending Christmas in Verona with his relatives – Shakespeare plot country. She said it was snowing – yes, a real white Christmas, though apparently it loses its appeal as soon as your feet start to get wet. Fair enough.

Phoned my dad, who’s still in hospital – has been for several months now, on and off. Rotten way to spend Christmas, but then, he rarely observes it, so maybe it doesn’t make much difference. At least he seems to be on the up.

I also phoned my grandad in England, who told stories of 15 metre waves coming off the beach and over the fence, and a near-evacuation on Christmas eve. Hmm. Christmas certainly tests the el-cheapo phone companies, I can tell you. Their lines were chocka. We ended up having to call with good ol’ Telstra – hopefully the phone bill when it arrives won’t be too crippling.

So, what did I get for Christmas? Some CDs, some books, some clothes, a gigantic block of chocolate… the usual thing!