We set off into central London from my Uncle Hew’s place, with Hew in tow. We got off the train at Victoria, and strolled around to Buckingham Palace. Buck House is kind of impressive to people who’ve grown up elsewhere in the Commonwealth, and seen it on the telly every time there’s been a royal wedding. And it’s always a laugh to see the guards strutting around in their very tall hats.

The hotdog sellers were doing a roaring trade (a ludicrous UKP 4 a pop if I recall correctly), though I’m surprised they allow such blatant commercialism so close to the Palace. They appeared to be the only vendors. Perhaps they let just one set of food vendors operate there for fear of a starving tourist populace jumping the fences and ransacking the Palace in search of food. Or perhaps it’s just another way of raising revenue since they got their pay cut. Though I didn’t spot a "By Appointment To Her Majesty The Queen – Greasy Freddy’s Hotdogs" crest on the side of the carts.

So did we shell out these exorbitant amounts of money for mere sausages in buns? You bet – we were starving.

We carried on, following in reverse (if that makes any sense whatsoever) my footsteps the first day I had ever come to London, through Green Park. Then we strolled along Piccadilly towards Piccadilly Circus, looking in shop windows, and stopping off to look at an arts and craft market which was running in a churchyard. Can’t say I saw anything particularly inspiring there, but we did pick up some wacky and tacky English postcards in a shop a bit further along. 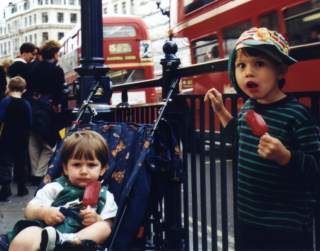 The plan had been to meet Josh and Cathy, who were over from Australia on a more long term basis (living, working, the whole bit) at a pub in Bayswater to watch the delayed telecast of the AFL Grand Final. I had a vested interest in seeing Carlton (the Blues) win – I got them in my office sweep. No doubt all my colleagues at home were hoping for the Blues would get a pummelling by the Kangaroos, since I had won the pre-finals footy tipping competition.

I was going to let L and the kids take in some more of London while I enjoyed a few beer soaked hours watching the footy with some mates. I even thought of dragging Hew along for some of this fine Aussie culture, but he wasn’t feeling very well, wasn’t too keen and decided to go home early.

L seemed a bit overwhelmed by Piccadilly Circus on a fine weekend afternoon (well, most people would be the first time they experienced it – Oh the humanity!) and somehow it didn’t quite seem fair to leave her with the kids in the middle of this strange chaotic metropolis. So I elected to ring Josh with my apologies, and we tramped off to find a less chaotic bit of London to explore. I rang Josh later, and he said the Kangaroos trounced the Blues anyway, so there you go.

We explored the shops of Regent Street, nosing through the massively fun toy shop Hamley’s, and also taking a detour around the very fashionable Carnaby Street. The BBC Shop further up Regent Street also got a look-in, and then we went exploring a little more off the beaten path, down an obscure street called New Cavendish Street, which turned out to have almost no attractions at all worth looking at (probably why they don’t mention it, let alone rave about it, in the guide books).

But we did get very close indeed to the structure formerly known as the Post Office Tower. I know it used to be the Post Office Tower because I remember it from that Goodies episode, Kitten Kong. My A To Z labels it as the Telecom Tower, but you can just bet that by now it’s called the BT Tower. The habit of renaming utilities and their associated infrastructure must be a worldwide thing – no wonder my neighbour is confused about who runs the phones.

We found Tottenham Court Road, and a tube station to get us back to Victoria, where we took a train back to East Croydon. Then we got some groceries from the Safeway there, and waited for a bus back to Hew’s house. From the multitude of buses leaving from East Croydon station, I made an educated guess about three I thought we could take, and we boarded one and ended up at the wrong place. Not far off course though, and not far from Hew’s house, so we walked the rest of the way. I made a mental note to try the other two routes next time.