Today, we got religion, and we got robbed. Well, almost. Well, okay, not even almost. But we did visit Il Vaticano (The Vatican), and we did have a close encounter with a pickpocket.

You can hardly go to Roma without visiting the Vatican, so we caught the Metro to the brand spanking new Cipro/Musei Vaticani station, supposedly slap bang next to the Vatican. But you still have to haul yourself up a bunch of stairs, along a street, up loads and loads of more stairs, along another street with chaotic renovations all over the place… come to think of it, I wonder if we did get off at the right station.

And then, we saw the queue. The queue to get into the Vatican Museums was phenomenal, and growing by the second. We looked at the queue. We saw how slowly it was moving. We looked at the kids, and considered how overjoyed they would be to stand in a queue for ages so that we could stumble around in museums for hours looking at artefacts. Not very overjoyed at all, actually.

Heck, we’re not even Christians. So we decided to give the museums miss, and look for the part of the Vatican which involved wide open spaces and no queues. And we found it: Piazza San Pietro (St Peter’s Square). It’s huge and impressive, and even though there were hundreds and hundreds of tourists around, it wasn’t crowded. It’s not technically speaking, square, but then, most squares aren’t.

Having read in the guidebook that you might as well just throw your postcards in the bin as mail them at an Italian post office (is this true – would any genuine Italians care to elucidate?) we mailed them at the Vatican Post Office. Then after gazing around the Square again, we wandered off down the equally impressive Via della Conciliazione, in search of lunch.

We crossed over the river and found some lunch, which we munched on, seated on the steps of Chiesa di San Giovanni dei Fiorentini (yet another church), while we watched the people and cars and buses of Roma go by. After that we walked back towards the Vatican, found some thoroughly delicious and surprisingly quite decently priced gelato, as well as an Italian ad for "Austin Powers – La Spia Checi Provava". Then we got back on the Metro at Ottaviano. 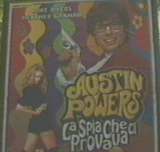 I spotted the man almost immediately. He got on the train at the door opposite to where we were sitting. He carried a coat over his arm, even though it was a hot and sticky day, the kind of day when nobody in their right mind would take a coat. He stood right next to a man standing in the doorway, even though the train wasn’t crowded. Their faces just centimetres apart, he stared at the man intently. I watched as from somewhere underneath the coat, a hand began to move forward. Its fingers open, slowly moving towards the second man’s jacket.

Then the hand stopped and withdrew. Maybe he thought he’d been rumbled. Maybe he realised how empty the train was. He came over to the door next to where we were sitting, and looked around the carriage, eyeing up prospective victims. Apparently there weren’t any on board, and instead he felt into one of his pockets and pulled out a camera. Just a small one, and he rolled it over in his hands, looking at the various buttons. He pointed it at the ground, pressed a button and the flash went off. Someone had obviously been relieved of their camera earlier in the day.

I hissed at L to keep an eye on her wallet, and kept a close eye on the man until we all got off at Termini, making sure that we were behind him in the crowd.

Nothing else nearly so exciting happened for the rest of the day, though we did get to watch Bananas In Pyjamas dubbed into Italian, which was pretty amusing.