After a quick stop-off by the Colloseo to exchange the el-cheapo t-shirt L had bought for one that didn’t have a hole in it (there’s a tip for any of you wandering off to Roma – check the merchandise before you walk away), we wandered up Via Del Circo Massimo, enjoying the impressive view of the remains of Circo Massimo (Circus Maximus). Actually there aren’t really remains as such, it’s just grass. There seemed to be swarms of nuns and priests of various orders walking in the sunshine through it, though to be honest, there are swarms of nuns and priests all over Roma.

We carried on towards the river, passing by the Temple Of Hercules. (Yes, for any philistines reading, the legend is older than the TV series.) Like much of Roma, it was wrapped up in scaffolding. Ah, but what scaffolding! This was classy Italian scaffolding, with lots of shiny brass. You just don’t get scaffolding that nice looking back at home.

Roma was undergoing lot of renovation, for next year, the 2000 Jubilee. As far as years go in the Christian world, they don’t get much bigger than this. Okay, so maybe it won’t technically be two thousand years since the birth of Christ, and maybe it won’t be the new millennium until 2001, but that’s not going to stop the Romans having a huge party next year.

We walked along the river Tevere (Tiber) for a bit. It’s quite wide and impressive, and full of little waterfalls, which explains why there were no boats using it. Some of the bridges looked positively ancient, and knowing this city, probably were.

There were more creepy machine-gun-equipped Carabinieri outside the synagogue in the Jewish quarter, and to us mild-mannered Australians, there are few things more likely to keep us scurrying along with our heads down.

We decided to treat ourselves with a classy lunch, a lunch of gastronomic sensations, a lunch that our tastebuds would be forever grateful for. Or failing that, McDonalds. We were curious to see what McDonalds could possibly offer to the locals in this land of such superb food, and also to have at least one meal that the kids would tuck into happily without the noises of apprehension that so often accompany meals of unfamiliar food.

And you know what, it wasn’t too bad at all. The burger was better than any Maccas burger I’d had before. They had nice salads, and best of all, THEY SERVE BEER. Is that an idea whose time has come or what? Australian McDonalds should take that on board – that would be an instant winner. "I’ll have a McLager please".

After chomping down our food and despatching yet another couple of begging gypsy children with a calm but determined "No", we carried on up Via Arenula, and eventually found the Pantheon. Of course, the Pantheon isn’t very old… What’s there now is actually the third version of the building, and it only dates back to about 120AD. It’s big and impressive, and the decorations inside are absolutely stunning. 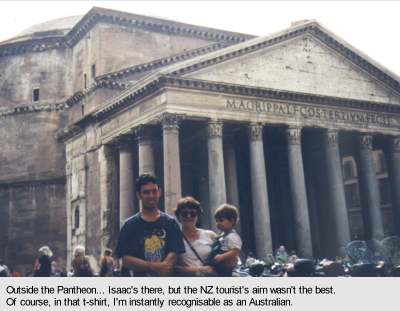 Equally impressive are the obelisks scattered around Roma. I found one outside the parliament building, which was apparently brought back from Egypt in around 30BC. Either they take good care of them, or they’re extremely well built, because they all look brand new. I wonder what the hieroglyphics say – something like "Augustus was here" perhaps?

Off the beaten tourist track we found a kind of historic tourist anti-attraction – the very grassy and run-down mausoleum of Augustus Caesar, which also holds a few other emperors who shacked up with him in the afterlife. And nearby, cursing the sunshine, were a bunch of umbrella salesmen, just hanging around having a smoko, their bags full of umbrellas close to hand, ready to burst back onto the streets as soon as the clouds reappeared.

From there it was only a short walk to the Scalinata di Spagna (Spanish Steps), where we re-filled our water bottles. The proliferation of free public drinkable water in Roma to me is a sure sign of civilised society. We sat for a while by the fountain, then took the lift inside the Metro station up to the top of the steps (hey give me a break; we had Jeremy in the pram). We ate snacks and admired the view, then had a quick look at a bit of Villa Borghese, the bit called Pincio.

Then we headed back to the hotel, and after L had zipped out to do some much needed laundry, we headed out for dinner. We decided to reject the place we’d tried three times – the one that had delicious food but prices that increased wildly every time we’d gone there – like they were testing us tourists to see just how much they could charge us. "Oh, they came back. Bump the prices up 30% this time and see what happens."

Instead we found a lovely little Trattoria a couple of streets away. We sat down at some tables out on the street, and discovered we were sitting next to a girl from North Caulfield, which for those of you who aren’t familiar with the suburbs of Melbourne, is about five minutes drive from where we live in Glen Huntly.

Freaky. After she finished, our next set of table-neighbours turned out to be a couple more Aussie girls, one of whom had lived in Melbourne about three doors from where I grew up in St Kilda. Blimey it’s a small world. The food was delicious, the prices predictable and cheap, the service good, the company friendly, and we vowed to dine here every evening we had left in Roma.